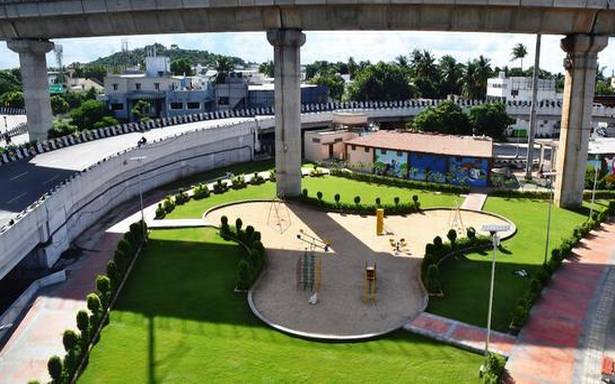 Chief Minister M.K. Stalin is likely to open the Kathipara Urban Square, a multi-modal space near Alandur Metro station, within two weeks. Originally meant to be ready in May, the facility is now almost complete, sources said. The urban square is being constructed at a cost ₹14 crore over an area of 55,000 square metres under the Kathipara flyover. It will consist of bus bays, food stalls, retail outlets, a play area for children and landscaped space. A Chennai Metro Rail Limited (CMRL) official said: “Some landscaping and work on laying the roof tiles for the retail spaces will be done in a few days.” While the walking area and bus bays will be immediately available for public, the retails outlets and food kiosks will come up much later.

CMRL has floated tenders to develop the space for retail outlets and other facilities, which will take a few months. The idea is to encourage people to use Alandur Metro station, the largest elevated connecting station in the phase I project. The square will be connected to the station to provide easy access.

Officials said if the space managed to attract visitors, the patronage at the station would improve eventually.