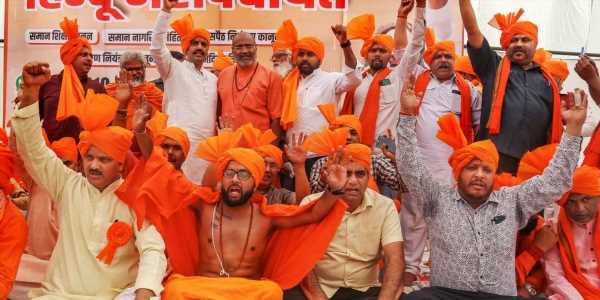 Hindu festivals are now becoming occasions when anti-Muslim hatred is expressed freely through slogans and songs that are full of abuse against Muslims or calls to either kill them or humiliate them, observes Apoorvanand.

Violence against Muslims marked the celebration of the Hindu festivals of Navratri and Ram Navami in the states of Bihar, Uttar Pradesh, Madhya Pradesh, Gujarat, Karnataka, West Bengal and Goa.

Add to the festivals, the newly discovered occasion of ‘Hindu New Year’.

For the last decade it is being celebrated with much gusto, with an aim to unseat the ‘Christian’ New Year.

One can say that all this was not new.

Hindu festivals are now becoming occasions when anti-Muslim hatred is expressed freely through slogans and songs that are full of abuse against Muslims or calls to either kill them or humiliate them.

In fact, you will find more of this than the hailing of gods and goddesses in whose names these festivals are being celebrated.

People from outside India are left puzzled. What could have caused this violence?

Did Muslims try to stop or prevent the festivities? What could have been the reason for the violence against them?

The pattern is familiar.

Hindu religious processions, armed with swords and weapons of different kinds, try to force their way into localities where mostly Muslims live.

There they play provocative songs, flash their weapons and threaten Muslims to change their religion or be eliminated.

We see open calls for the genocide of Muslims, right in the heart of Delhi and then in different states through ‘Dharma Sansads’, and those calling for the massacre of Muslims are left free to take it to a different level.

The juma namaaz being disrupted in Gurugram has become so normalised that we have even stopped talking about it.

Where violence is not spectacular, we read about Hindus trying to target the hijab or burqa worn by Muslim women.

Or Muslims being attacked while travelling, on the suspicion that they are carrying beef or even non-vegetarian food.

They can be attacked for simply going about their business, like the man whose cart of watermelons was vandalised outside a temple or the biryani seller whose cart was damaged.

Or the mehndiwallahs who were threatened or the bangle seller who was assaulted and then jailed.

Consider an incident like this, which was reported by a woman.

While travelling by train a young boy, not even 10, suddenly asks the woman’s husband if he was Muslim.

When he affirms it, the boy innocently responds that he should be shot.

The couple is so shaken that, the wife says they decided not to travel by train anymore even when air travel was beyond their means.

Is it not violence when Muslims returning home after Eid or Bakrid are advised not to travel with meat items?

Or when the houses of Muslims are inspected to find out if they had hidden cows there? Or beef in their fridge?

Or, when television channels raise a bogey of different kinds of jihad?

This should not be treated as a joke as now the claim of all these ‘jihads’ is being made by those who influence policies.

RSS chief Mohan Bhagwat recently expressed concern that Muslims had hatched a conspiracy to infiltrate the administrative apparatus of the Indian State — what a media platform had already identified as ‘UPSC jihad’!

Can we say that the seizure and control of the Markaz at Nizamuddin in Delhi by the government is an act of violence?

Can we say that the change of name of Allahabad to Prayagraj is violence?

Muslim children in schools being told by their friends or teachers — and this is not new at all — that they are Pakistani or are blamed for the so-called Mughal atrocities — is it violence or not?

As journalist Alishan Jafri wrote in exasperation, there is an exponential increase in violence of different kinds against Muslims: ‘More than 20 calls for an anti-Muslim genocide by influential Hindutva leaders in the last 24 months.’

Jafri notes, ‘While we look at the quantitative increase in hate speech no one discusses the qualitative change in rhetoric. Jingoistic vision of India and Vande Mataram has been replaced by Hindutva and Jai Shri Ram, Desh ke gaddaron … Mulle Kaate jayege … Ram Ram chillayenge are now the new normal slogans of Hindu leaders.’

So, what could be the reasons for this violence?

As can be seen from the above, multiple reasons are offered.

Muslim men are conspiring to take away Hindu women is an age-old anxiety.

The sexual inferiority complex that Hindus have been filled with vis a vis Muslim men makes Hindus turn violent against them.

An educated lady even claimed that they are in fact trained as stud bulls. She claimed that it was actually sex jihad the Muslims were waging and not merely love jihad which sounded benign.

The idea that they are conspiring to overtake the Hindu population is very persuasive for Hindus.

Also that Muslims committed atrocities on their forefathers, that Muslim rulers had killed lakhs of Hindus have become part of the Hindu common sense.

The creation of Pakistan is seen as a valid reason for treating all Muslims in India with permanent suspicion.

All this is not new. The violence against Muslims has reached a new level. It has been turned into an everyday affair in India.

It is difficult to keep count of the big and small outfits that have mushroomed across India bearing Hindu names but with a not-so-hidden project of committing violence against Muslims in different forms.

The idea seems to be to keep the pot boiling all 365 days.

Sometimes people try to explain it away by calling it a design to polarise voters as elections are taking place.

On other occasions we call it a device to take people’s attention away from the real issues.

What this continued symbolic, cultural and physical violence on such a large and diffused scale does is that it makes a large number of Hindus complicit in acts which are criminal.

They then become the foot soldiers of the project of a ‘Hindu Rashtra’ where Muslims would live in a permanent stage of subjugation.

It gives these Hindus a perverse sense of ownership over India and that Muslims are at their mercy.

This is what V D Savarkar had imagined and the RSS has been planning for nearly a century.

This heightened violence is mostly aided by the police and administration and ignored by the courts.

It demoralises the Muslims and forces them into a shell.

The majority of Muslims become fatalistic and lose any interest in politics.

That is a great help to the politics of the RSS.

It makes Muslims suspicious of Hindus and the State and ironically also turns Hindus into Muslim sceptics.

Hindus resent the Muslim demand for justice. They feel that it is against them.

Violence always increases the divide and distances the Hindus from Muslims. Again something the RSS wants.

We can understand that violence against Muslims has only one reason and one aim: A push towards an RSS-dominated India which they want Hindus to accept as a Hindu Rashtra. Its foundational principle is anti-Muslim and anti-Christian violence.

Apoorvanand is a professor at Delhi University.