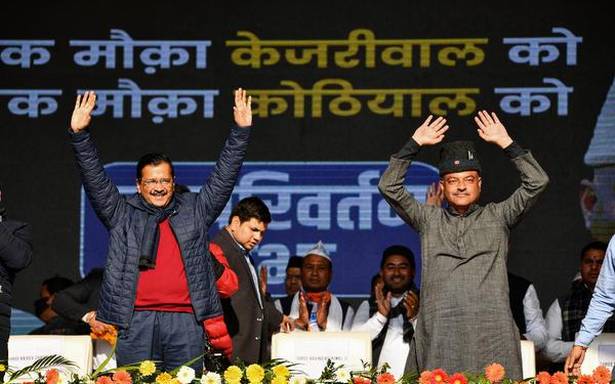 Speaking at a rally in Dehradun, Mr. Kejriwal said Uttarakhand was a “land of deshbhakts” or nationalists, with a large number of the serving and retired armed forces’ personnel coming from the State.

“Each family has someone in the forces. If Uttarakhand’s faujis (servicemen) decide that this time there will be an AAP government, then no one can stop it from happening,” he said.

He said if AAP came to power in Uttarakhand, the government would roll-out the ₹1 crore compensation policy for all martyrs and also give government jobs to each ex-serviceman. He appealed to the armed forces’ community to not think of the parties they may have supported earlier, but to “think about the country” and “give Col. Kothiyal one chance”.

He said the party’s chief ministerial candidate, Colonel (retd.) Ajay Kothiyal, would himself hand over a cheque of ₹1 crore to the family of police, paramilitary and military personnel who die in the line of duty.

Remarking at the large gathering, Mr. Kejriwal said there were people as far as he could see. Hitting out at successive Congress and BJP governments for not delivering services, Mr. Kejriwal said an AAP government would implement the 24-hour power supply, with subsidies, better schools and free pilgrimages that have been implemented in Delhi.

Mr. Kejriwal said a visit to the Ram Temple in Ayodhya had inspired him to come up with the government scheme of sponsoring pilgrimages for senior citizens in Delhi. So far, he said 2,000 people had been sent on all-expenses paid trips to Ayodhya. “If more people go, it will spread good vibrations,” he said.

He said the AAP government in Uttarakhand would organise similar trips to Ajmer as well as churches for those who would like to visit.