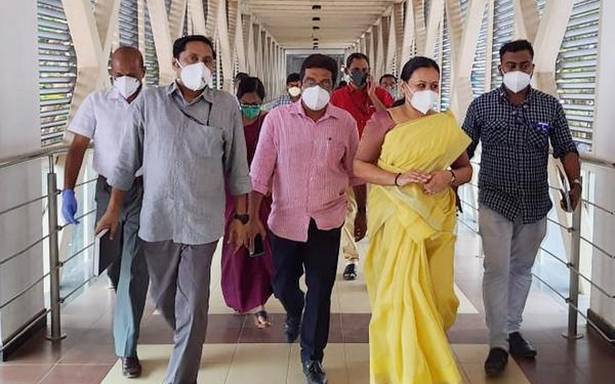 The surprise visit comes amid reports of procedures, including emergency surgeries, getting disrupted at the facility owing to the lack of stents

Health Minister Veena George conducted a surprise inspection at the cardiac catheterisation laboratory (cath lab) in the Government Medical College Hospital (MCH), Thiruvananthapuram, on Friday. The visit came amid reports of procedures, including emergency surgeries, getting disrupted at the facility owing to the lack of stents.

The issue had come up for discussion when the Minister visited the newly-established intensive care units (ICUs) at the hospital on Thursday. Following discussions with the college Principal and hospital superintendent, Ms. George had convened another meeting of college authorities in her office later in the day.

She conducted a stock-taking of the necessary items at the cath lab for a first-hand account of the situation during her second visit on Friday. During the exercise, the availability of adequate stock of stents, guide wires and balloons for procedures were ascertained in the laboratory.

The stock of stents is estimated to last for over a month. While the guide wires would last for another four or five days, necessary orders were issued by the Health Minister to procure additional stock.

Following the inspection, Ms. George said that none of the scheduled procedures were cancelled at the cath lab. She also tasked the Joint Director for Medical Education Thomas Mathew with submitting a report on the necessary procurement.

Before concluding her inspection, the Minister discussed other issues pertaining to the hospital with the officials concerned. She also interacted with the doctors, nurses, technicians and other staff of the Department of Cardiology.