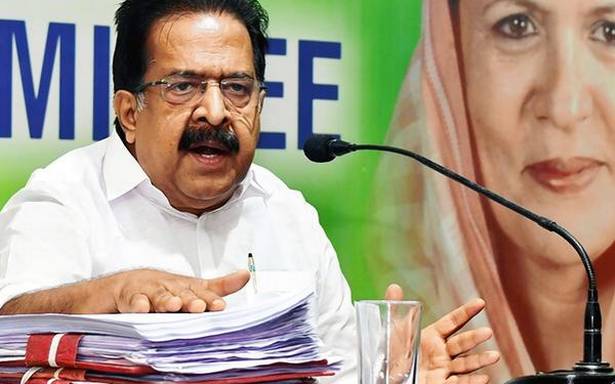 He said the national capital was facing a critical shortage of life-saving medical oxygen. It was home to more than 10 lakh Keralites. The State government should convert a portion of the Kerala House precincts to an "open medical" facility for Malayalees in New Delhi.

He slammed the Centre for allowing private manufacturers to set the price for the COVID-19 vaccine. The Centre got vials for ₹150 while States had to shell out up to ₹400 for a single dose. He said the onus was on the Centre to supply vaccine free to States.

He said the political parties were mindful that some experts had cited Assembly election campaigning as one of the causes for the second surge in coronavirus cases in Kerala.

The UDF would support the government’s attempts to curb the virus. However, it was against an extended and total State-wide lockdown. Such a measure would wipe out jobs, stall production and crater the State’s flailing economy,

Instead, Mr. Chennithala said the government should confine curbs on civic life to hotspots to prevent the flare-up from radiating out to other localities.

Authorities should enforce social distancing and wearing of masks via consensus. Shops should emphasise home delivery and rely on a token system to allot time to customers to prevent crowding.

Ideally, district medical officers (DMO) should create a shared pool of critical medical care equipment and apportion it as required. The government should redefine the hospital admission protocol. Only critically ill persons should receive intensive care.

A special task force should ensure the availability of medical oxygen, beds, ventilators, steroids and anti-viral medication. Mr. Chennithala flagged the need to regulate the cost of COVID-19 treatment at private hospitals. Such institutions should follow a referral system and not admit patients at will.

The State government should issue free provisions to the populace. It should bring outlying tribal settlements under the ambit of the universal vaccination programme. Authorities should prevent crowding at vaccination centres. They should give priority to high-risk patients.

Mr. Chennithala said district magistrates issued conflicting orders sowing confusion among people. There should be uniformity in imposing the pandemic protocol, he said.