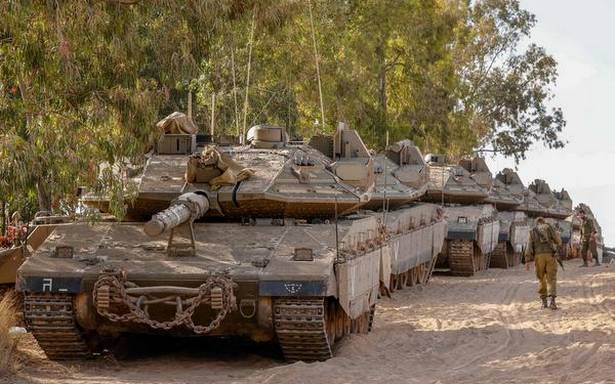 Though official estimates suggest that about 11,000 Keralites are employed as caregivers across Israel, there appears to be a dearth of accurate data to confirm the same

The myth of Keralite nurses working in some of the most dreaded battlegrounds echoes decades of stories from the first Gulf War to the conflict that currently unfolds in Israel.

Anita Prakash, a 38-year-old Chalakkudy native who works as a caregiver in Bartym street near Tel-Aviv in Israel, too has seen and experienced things that cut deep and nearly took her life. Ever since the conflict broke out, she has spent days learning to care for herself as much as she cares for others.

“We have about 60 seconds to run for shelter once the air-raid siren rings, but ensuring the safety of my wheelchair-bound patient is almost impossible. In the latest phase of conflict, the siren keeps ringing almost so frequently during the night hours that I can’t sleep any more,” she says.

Having started her career as an X-ray technician, she reached Israel in 2014 and has since been working as a caregiver to old women. “My husband and two daughters are in Kerala and I have not seen my four-year old younger kid since she was just three months old. I have to continue here as this country has helped my family repay bank loans and build a life on our own,” she said.

While landing in Tel-Aviv, did she have a clue about what she was in for? No. She began to understand the reality in the first few months of her arrival.

And as to whether the recent death of Idukki native Soumya Santhosh in a rocket attack from Gaza rattled her, she says: “Not just me but the whole Keralite caregiver fraternity is shocked. But considering the financial obligations many of us have back home, it’s still worth taking the risk”, she added.

Antony David, a 44-year-old Mannarkad native, too finds the looming threat of a default home loan much riskier over the rockets that light up the night sky above him. Employed as the caregiver of a 20-year-old wheelchair-bound person in Savyon, an upscale municipality in the Jewish state, some of the things he has experienced over the past several days are indeed horrific.

“Having reached here in November 2013, I have never seen the conflict escalating to this level”, he said.

It has been three years since he visited his family in Kerala though he does not appear that eager to return. “Even if the war intensifies, leaving this country is out of the question as Israel has given me everything, including a new house. Likewise, the sector here has ensured the economic well-being of thousands of Keralites by helping them meet their financial obligations, right from education loan to home and personal loans,” added Mr. David.

While official estimates suggest that about 11,000 Keralites are employed as caregivers across Israel, there appears to be a dearth of accurate data to confirm the same. Officials with the Norka Roots, a State agency for Keralite expats, attributed this lacuna to the practical difficulties involved in collecting the data of people emigrating through different routes.

“Once they have a problem, they can approach us. The Norka Roots will extend all possible means of support to the distressed through formal and informal interventions,” said Harikrishnan Namboothiri, CEO of Norka Roots.

Official sources, however, said the expats in Israel were much safer when compared to other countries that are in the grip of full-scale civil wars.