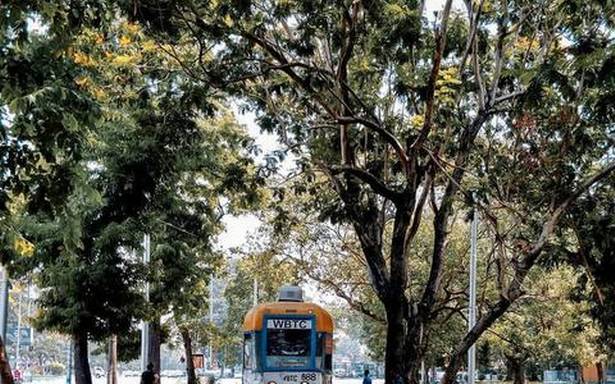 An association of tram users in Kolkata is planning to hold a protest this weekend to demand mainly the restoration of services that were stopped after cyclone Amphan and that have remained suspended ever since.

“Calcutta tramways is experiencing a stepmotherly attitude from the Transport Department since the Left Front regime. They have worked hard to reduce the ridership, service frequency and reliability. As a result, the system is currently existing only on paper. Only three routes are in operation at the moment and none of them offer a reliable service. Routes have been shut down one after another, under one pretext or the other,” Debasish Bhattacharyya, a retired scientist and president of Calcutta Tramways Users’ Association, told The Hindu.

“Our demonstration will highlight one such irregularity along the Maidan stretch (the scenic route no. 36), where service was discontinued after the cyclone. Traction polls were installed, brackets were fixed but the service has not been restored till date. Many tram cars are becoming non-functional as they are left idle inside the depot. Everybody in power is indifferent to this issue. We demand restoration of services of all closed routes of tramways across the city,” Mr. Bhattacharyya said.

According to the association, it is an established fact that tramways or light rail systems have solved transit problems in all megacities. “Tramways are emerging in many cities, irrespective of their economic condition, across continents. All the cities that discontinued their tram services during the 1940-60s now regret it and some of them have restored their past glory but at a price. Despite being aware of the advantages of an existing and operational tramway system, Kolkata is systematically destroying its priceless asset,” said Arghyadip Hatua, an urban policy advisor and a member of the association.

Mr. Hatua added, “What we are demanding will go a long way in making Kolkata one of the most liveable cities in the world. The Transport Department, Kolkata Traffic Police and the Kolkata Municipal Corporation should learn the philosophy of developments of tramways across the world; restoration of all existing tram routes that have been closed under one pretext or another; making all tramcars roadworthy and recruit essential manpower at every point to run tramcars in full capacity; and provide priority for trams on roads so that a time table could be maintained.”

Transport Department officials were yet to respond to the question whether they intended to resume the suspended services anytime soon.