Across Kolkata, there was a considerably higher sense of caution at polling booths, both from people and from the state machinery, compared to previous phases. 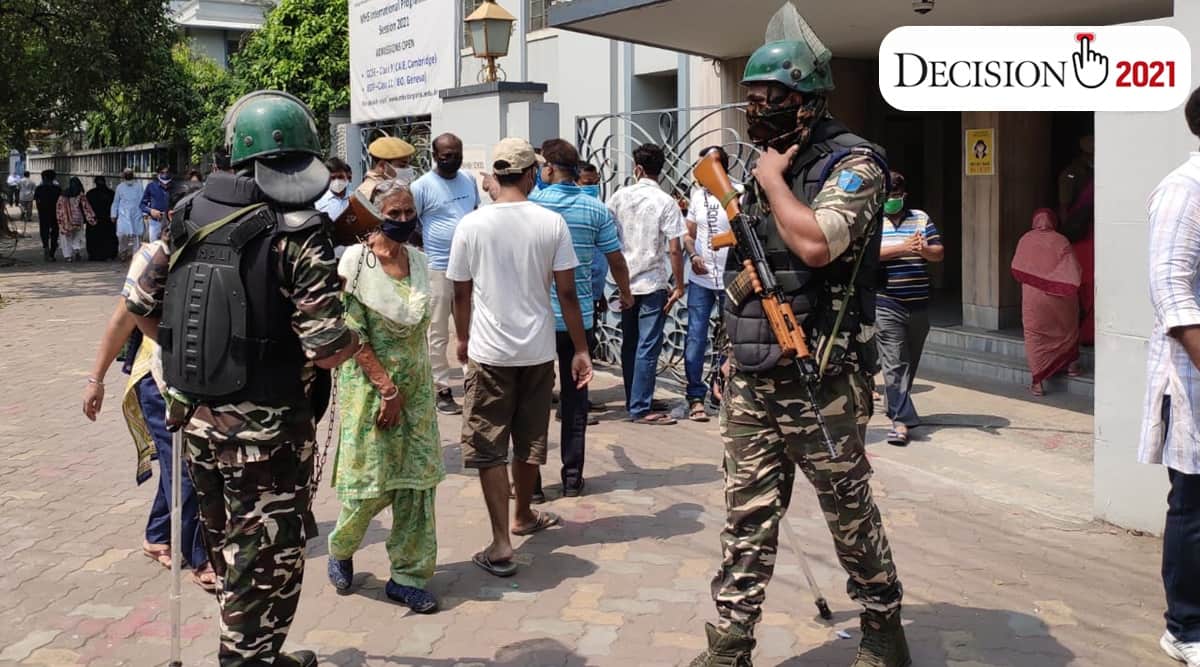 “Dandaon ekhane (wait here),” Debayan Roy told his 68-year-old mother Maitreyi as they neared Mitra Institution, their polling centre. Walking the 100-odd metres to the institute, Debayan scanned the scene before hurrying back, only to find that Maitreyi had not listened to him, following him to the centre.

“People are wearing masks, but there is still a queue. It’s dangerous, Ma,” Debayan said. A defiant Maitreyi replied, “I will vote. We’ll be careful. Stand at a distance.”

On Monday – the seventh phase of the West Bengal Assembly elections – similar conversations played out across the 34 seats, including the four in Kolkata, which went to polls under the shadow of Covid-19.

Mitra Institution, located in south Kolkata’s Bhowanipore, is a heavyweight polling booth. It saw Abhishek Banerjee vote in the morning, and in the afternoon, Mamata Banerjee, in a wheelchair and sporting a white mask, cast her ballot too.

Throughout the day, police personnel separated people standing in queues. Most people that The Indian Express saw were wearing masks. Inside a dimly lit corridor was a government worker with a bright blue bottle of sanitiser, a temperature machine, and a box of plastic gloves.

Across Kolkata, there was a considerably higher sense of caution at polling booths, both from people and from the state machinery, compared to previous phases.

At a booth at Beniapukur in Ballygunge, tables had been set up outside, and election officials, ID cards dangling around their necks, sanitised each hand thoroughly before people entered. A polling officer said, “Forget everything else. We have to be careful for ourselves and the voters. We all have families to go back to once this polling is done. So we are all being extra careful today.”

Much of the fear was driven by the knowledge that Covid-19 cases in Bengal are rising fast and that hospital beds are running out.

Outside Beniapukur, Soumya Roy stopped for a cup of tea just after voting, and told three other regulars, “I am afraid of even taking off my mask for this tea. Have you read the newspapers? The positivity rate in Kolkata is above 40 per cent.”

At the tea stall, there was much discussion about who was responsible for the increase in cases, and if it would affect the election results. “There are so many factors. Who will vote? And who will choose not to in these times? That can change many things,” Soumya said, sagely.

Yet, there was consensus on who the “villains” are.

“All these politicians are villains. The EC is a villain for holding these elections nonstop. The parties all blame each other, but nobody stopped their rallies,” Soumya said.

After someone pointed out that the Left had stopped their rallies, Soumya responded, “Even they did it too late… And look at the country’s situation.”