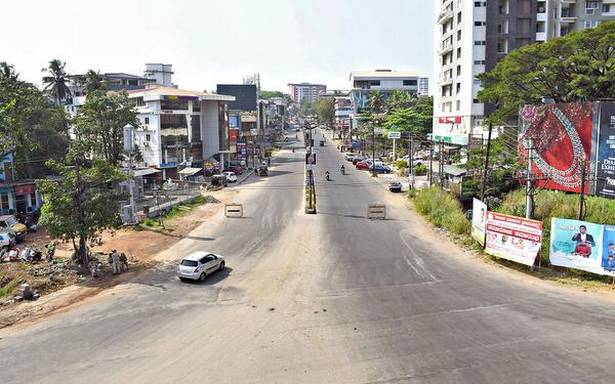 There were not many travellers on the buses, auto rickshaws and taxis.

The city police booked 517 cases under the Indian Motor Vehicle Act for violating traffic rules and 369 persons were fined for not wearing mask.

Police said that more than 110 vehicles plying without valid reason in the city were detained which were released later after their owners paid fine. The district police seized 10 vehicles and imposed fine on 108 persons for flouting COVID-19 protocol. A majority of the business establishments and educational institutions remained closed.

Medical shops, grocery and other shops dealing with essential commodities remained open in the twin districts.

The KSRTC and the private city buses operated only 50% of their services. Mangaluru KSRTC Divisional Controller Arun Kumar said among the routes where services have been reduced include Mangaluru-Kasaragod and Mangaluru-Benglauru.

Jayasheela Adhyantaya, president of Dakshina Kannada Bus Owners Association, said the travellers were less throughout the day. Most of the city bus services were stopped by evening. “Bus service on Sunday will depend on the number of travellers,” he said.

The city police set up checkposts across the city and at the border checkpost at Talapady to prevent people from travelling unnecessariy.

Deputy Commissioner of Police (Law and Order) Hariram Shankar and other police officers stood at the checkpost.