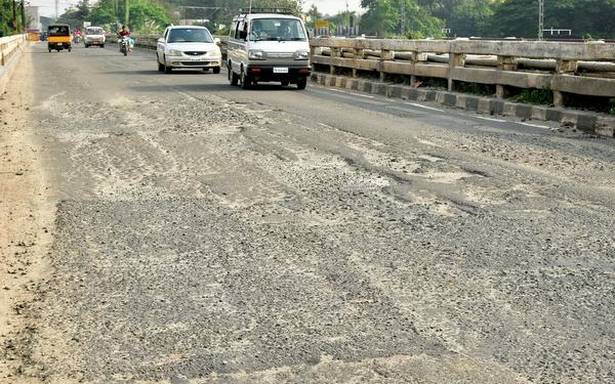 The surface on the overbridge across Kudamuritti river on the Tiruchi-Karur Highway has suffered extensive damage following the latest spell of rainfall making the narrow bridge a traffic bottleneck.

The road surface has been heavily eroded and in some places the old concrete surface is also exposed. Cracks and potholes have also developed at several places on the bridge, forcing motorists to move at a snail’s pace to negotiate the bridge.

With a police check-post being located close to the bridge, steel barricades have been placed to force vehicles to slow down at the spot. Besides, town bus halts are also located right next to the check-post. Traffic snarls are a frequent occurrence, especially whenever bullock carts cross the bridge, town buses halt near the check-post or when the police signal a vehicle to pull over for checks.

The bridge across the river, close to its confluence point with the Cauvery in the city, has grown weak over the years. Built by the British in 1924, the narrow bridge has been struggling to cater to the growing traffic. The Highways Department has even placed a signboard prominently asking motorists to ‘go slow as the bridge is in disrepair.’

Irate commuters fret and fume over the delay in executing a proposal to widen the bridge. Although the State Highways Department is currently widening the 11-km stretch between Tiruchi and Thindukarai, a proposal to widen the Kudamuritti bridge on the highway was de-linked from the project for reasons best known to the authorities.

The department had originally planned to build a new bridge across the river and included it in the proposal for widening and strengthening of the Tiruchi-Thindukarai stretch of the highway at an estimated cost of ₹73 crore. This included a plan to construct a new bridge across Kudamuritti at a cost of ₹15 crore. The department later decided to take up the construction of the bridge as a separate project.

A government order has since been issued for preparation of a detailed project report for the construction of the bridge. But the project has not reached the execution stage yet. A team of experts would have to make a technical study and prepare the report, sources indicated.

When contacted, a Highways Department officer said that temporary repairs would be carried out on the bridge over the next couple of days.

However, with nearly 80% of the road widening project on the Tiruchi-Thindukarai section being completed so far, residents of the suburbs are clamouring for the early construction of the bridge.

“Earlier, they said construction of a new bridge will be taken up as part of the widening of the Tiruchi-Thindukarai stretch. Now the road widening is nearing completion; once it is completed the volume of traffic is bound to increase on the stretch as more vehicles would take this route instead of the Tiruchi-Musiri Road. The authorities should expedite the process and ensure that the new bridge was built at the earliest to fully de-congest the stretch,” said P. Ayyarappan, a road safety activist of Allur.