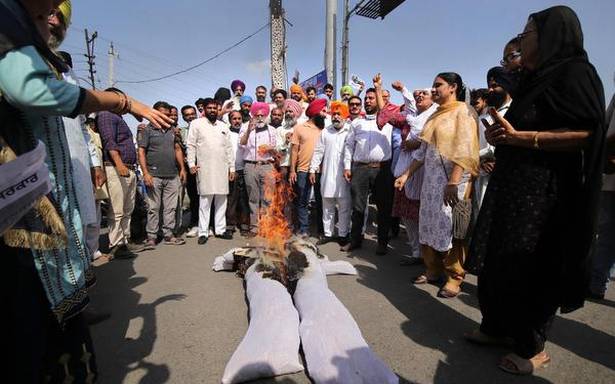 Police resorted to the use of water cannons on Wednesday to disperse agitating workers and leaders of the Aam Aadmi Party’s (AAP) Punjab unit here as they marched to gherao the official residence of the Punjab Governor against the alleged failure of the Uttar Pradesh government in arresting key accused in the Lakhimpur Kheri violence and the “indifferent attitude of the BJP (Bharatiya Janata Party) government at the Centre” towards farmers.

As AAP members started their march from near the MLA hostel towards the Raj Bhavan, they were stopped at barricades. The police said water cannons were used to disperse the crowd after the protestors attempted to forcefully break the barricades. Many of them were detained by the police and released later.

AAP members were demanding the immediate arrest of Ashish Mishra, the son of Union Minister of State (Home) Ajay Mishra, for his alleged involvement in mowing down farmers protesting against the Centre’s three agricultural laws in Lakhimpur Kheri. They also demanded the dismissal of Mr. Ajay Mishra from the Cabinet.

AAP leaders staged a dharna at the check post near the Raj Bhavan and raised slogans against the BJP government. Punjab affairs in-charge and MLA from Delhi, Jarnail Singh, and MLA Aman Arora, said that the AAP, through the Governor of Punjab, wanted to raise the point of the delay in arrest of the accused in the Lakhimpur Kheri violence incident.