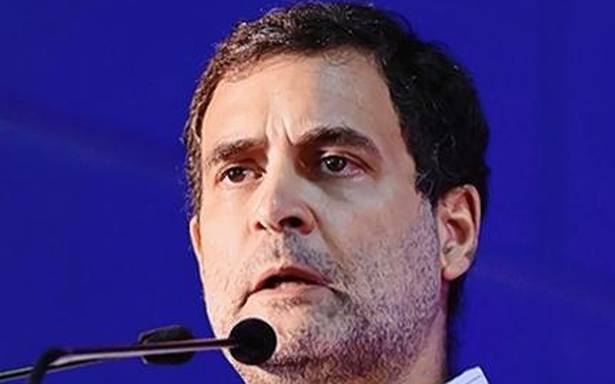 “The U.P. Police SIT report has highlighted that massacre of farmers at Lakhimpur was a pre-planned conspiracy and not a negligent act,” Rahul Gandhi said.

Former Congress chief Rahul Gandhi has given an adjournment notice in the Lok Sabha for discussing the SIT report in a case of violence in Lakhimpur Kheri district of Uttar Pradesh, in which eight people were killed.

In his notice, Mr. Gandhi has sought for adjourning the business of the House and demanded that the Special Investigation Team’s (SIT) report on the Lakhimpur Kheri incident be taken up for discussion.

“I hereby give notice of my intention to ask for leave to move a motion for the adjournment of the business of the House for the purpose of discussing a definite matter of urgent importance.”

“The U.P. Police SIT report has highlighted that massacre of farmers at Lakhimpur was a pre-planned conspiracy and not a negligent act. The SIT has recommended for the modification of the charges against all the accused,” he said in his notice submitted to the Lok Sabha secretary general.

“The government should immediately sack the MoS, Home Affairs, Ajay Kumar Mishra, and ensure that justice is delivered to the families of the victims,” Mr. Gandhi said in his notice.

The Congress is likely to create an uproar in the Lok Sabha over the issue on Wednesday.

Mr. Gandhi had alleged on Tuesday that the Opposition was not being allowed to raise matters of public importance in Parliament, which was merely a building and a museum now.

The SIT has submitted before a court that the killing of four farmers and a journalist in Lakhimpur Kheri, in which Union Minister of State for Home Affairs Ajay Mishra’s son Ashish Mishra is among the 13 accused, was a “pre-planned conspiracy” and also sought to substitute lesser charges in the case with graver ones.

After hearing the arguments on the application moved by the SIT, Lakhimpur Chief Judicial Magistrate (CJM) Chinta Ram on Tuesday allowed it to add Indian Penal Code (IPC) Sections 307 (attempt to murder) and 326 (voluntarily causing injuries by dangerous weapons) in the FIR in which Ashish Mishra is the main accused, senior prosecution officer SP Yadav told PTI. Relevant charges under the Arms Act were also allowed to be added.

The violence in Tikunia in Lakhimpur Kheri district on October 3 that set off a political storm ahead of the 2022 Assembly polls in Uttar Pradesh and Punjab, among other States, had left a total of eight people, including two BJP workers, dead and two separate FIRs were filed in connection with the incident.

It erupted when a group of farmers was protesting against the visit of Uttar Pradesh Deputy Chief Minister Keshav Prasad Maurya to Ajay Mishra’s native place.