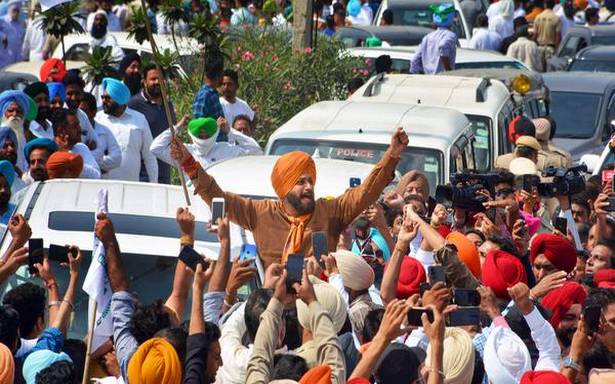 Mr. Sidhu asked police officials to take action against perpetrators of the Lakhimpur Kheri incident rather than stopping public representatives

Several Punjab Congress leaders, including Navjot Singh Sidhu, were on Thursday prevented from heading to Lakhimpur Kheri and were detained at a police station in Saharanpur in Uttar Pradesh.

Earlier in the day, a large number of party workers, leaders, including several Ministers and legislators assembled in Mohali and headed towards Lakhimpur Kheri in their vehicles to protest against the killing of farmers during violence in the U.P. district. The protestors led by Mr. Sidhu were stopped at the Haryana-Uttar Pradesh border where U.P. police had put up barricades.

Several party leaders – Mr. Sidhu and Ministers Amarinder Singh Raja Warring and Vijay Inder Singla, among others – were arguing with senior police officials for not letting them proceed.

Mr. Sidhu asked police officials to take action against perpetrators of the Lakhimpur Kheri incident rather than stopping public representatives.

He slammed U.P. police for not arresting the son of Union Minister of State for Home Ajay Kumar Mishra.

According to the protesting Congress leaders, U.P. police officials told them that they could allow only five persons to Lakhimpur Kheri. But the party leaders insisted on allowing Ministers and MLAs from Punjab.

Punjab Congress working president Sukhwinder Singh Danny had earlier said they would stage a sit-in wherever they were stopped from heading towards Lakhimpur Kheri.

Congress legislator Sunder Sham Arora had said they were ready for courting arrest if prevented from going to U.P.

Before the protest march, a group of farmers showed black flags to Mr. Sidhu’s cavalcade when it was on its way from Patiala to Mohali.

Mr. Sidhu has demanded the arrest of MoS Home Ajay Mishra’s son in connection with the death of farmers during violence in U.P., saying he would go on hunger strike if action is not taken against him by Friday.

Mr. Mishra’s son has been booked for allegedly mowing down four farmers in Lakhimpur Kheri on Sunday. However, the Union Minister has denied allegations about his son’s involvement in the case.

Chief Minister Charanjit Singh Channi also joined Mr. Sidhu for a brief period when the march was about to start.

Before the protest march Thursday, Mr. Sidhu, who was holding a ‘farmers’ flag, slammed the BJP-led government in U.P. over violence in Lakhimpur Kheri that took lives of eight people.

He asked why UP authorities hadn’t taken action against Mishra’s son even after an FIR was lodged in the matter.

“Are Union Minister and his son above the law and constitution?” he asked.

Mr. Sidhu described Congress leaders Priyanka Gandhi Vadra and Rahul Gandhi as “saviours of democracy.” Meanwhile, Haryana Congress leaders, including Bhupinder Singh Hooda, Kiran Chaudhary, who started their march from Panipat were also not allowed to move ahead from the Haryana-U.P. border. They were led by Kumari Selja.

Four of the eight people who died in Sunday’s violence in Lakhimpur Kheri were farmers, allegedly knocked down by vehicles driven by BJP workers travelling to welcome U.P. Deputy Chief Minister Keshav Prasad Maurya to an event in the area.

Two BJP workers, Mr. Mishra’s driver, and Raman Kashyap, a journalist working for a private TV channel, were also killed in the incident.

While the first three were allegedly lynched by agitating farmers, the scribe, according to his father, died after being hit by a vehicle when he was covering farmers’ protest against Maurya’s visit to Mishra’s native place.

No arrests have been made in connection with the case so far.