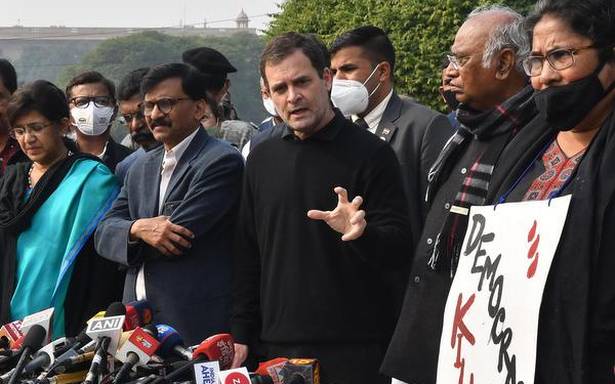 Union Minister of State for Home Affairs tried to kill farmers. he says

On a day when the Special Investigation Team probing the Lakhimpur violence that claimed eight lives submitted that the entire incident was a “pre-planned conspiracy”, former Congress president Rahul Gandhi demanded the resignation of Union Minister of State for Home Affairs Ajay Mishra and sought an apology from Prime Minister Narendra Modi.

He alleged that the Minister tried to kill farmers and the Prime Minister knew as he was a member of his team.

“A Minister has tried to kill farmers. The Prime Minister knows as he is in his team. We raised the issue but we were not allowed a discussion on it even then. We were all silenced at the time after we wanted to discuss the issue,” Mr. Gandhi said. He was speaking at the conclusion of the joint Opposition march protesting against the suspension of 12 Rajya Sabha MPs.

To another question, he said, “When they ran their jeep over farmers, which forces were behind them? Who gave them the liberty and which force kept them out of jail?” He alleged that there are two or three capitalists who want to steal the farmers’ income who are backing Mr. Modi.