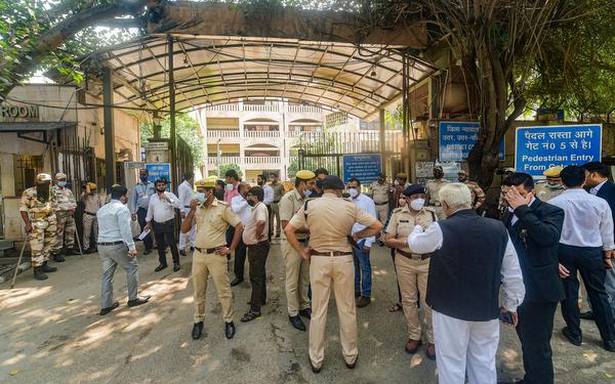 Lawyers abstained from work in all district courts in Delhi on Saturday, a day after jailed gangster Jitender Maan alias Gogi and his two assailants were killed in a shootout inside a courtroom in Rohini.

No work took place in the district courts, except urgent matters such as bail and custody extension, as the lawyers did not appear before judges, said Sanjeev Nasiar, the spokesperson of Coordination Committee of all District Courts Bar Associations in Delhi.

The strike was called by the committee seeking modification of security norms inside all the seven district courts premises here.

The courts, however, passed orders and judgments that were already scheduled for Saturday, he said.

Advocate Manjeet Mathur, the secretary of Rohini District Courts Bar Association, said the strike was peaceful and no information regarding any unpleasant incident was received from any of the seven courts premises.

Advocate Dilip Kumar, who has his chamber in Patiala House Courts premises, said though lawyers went to their offices, they did not appear before the judges.

The advocates also did not take part in any virtual or physical hearings in other district courts — Rouse Avenue, Tis Hazari, Dwarka, Saket and Karkardooma.

A team of lawyers also met the Commissioner of Police on Saturday and discussed matters related to security, Mr. Nasiar said.

A turf war broke out inside the crowded Rohini courtroom on Friday between two rival gangs in which jailed gangster Jitender Maan alias Gogi and his two assailants posing as lawyers were killed in the dramatic shootout that also saw police fire bullets in retaliation, officials said.

Video footage of the incident, which exposed security lapses in the system, showed policemen and lawyers rushing out in panic as gunshots rang out inside courtroom number 207.