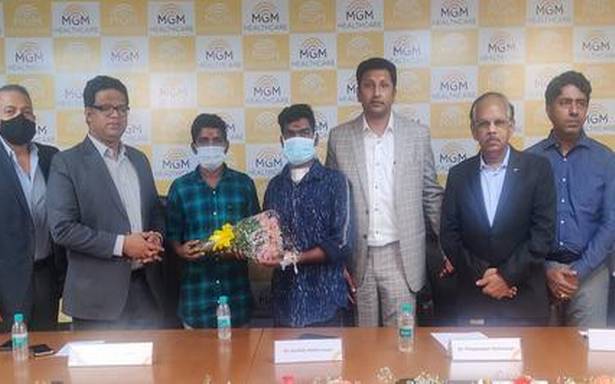 A 26-year-old kabaddi player battling COVID-19 recently underwent liver transplant at a city hospital. His brother donated a part of his liver. The patient has since recovered and been discharged, hospital authorities said.

Ragul Gandhi, a national-level kabaddi player, was brought from Puducherry to MGM Healthcare in a critical stage. He had developed fulminant liver failure and jaundice that worsened his condition. Within two days, he slipped into a coma.

The doctors did a 12-hour procedure on May 21, barely 24 hours after his admission. “Ragul was referred to us with just one or two days’ life in him. He was struggling even in the ambulance. We were all scared but sprang to action,” said Thiagarajan Srinivasan, director of the hospital’s Institute of Liver Diseases, Transplant and Hepatobiliary Surgery. The patient was intubated in the ambulance and transported to a special isolated intensive care unit. He underwent continuous plasma purification, toxin filtration and liver dialysis. A CT scan of his lung revealed no viral infection.

COVID-19 tests on Ragul returned negative for lung involvement, indicating that with necessary protective measures a transplant was possible.

Meanwhile, Ravi R., academic director, liver diseases, discussed the issue with Liver Transplant Society of India secretary and reached a consensus that an emergency liver transplant was the only option to save the sportsman’s life.

The hospital created two bio bubbles – one for the donor and another for the recipient. Around 50 healthcare workers, including a team of 13 doctors, including two anaesthesiologists, besides paramedic and nursing staff, were deployed.

Ragul was discharged on June 7. The team remained in isolation for 15 days after the procedure. None of them tested positive for the infection, said Dr. Thiagarajan, adding Ragul would be fit to play khabaddi within six months.

Doctors said Ragul’s condition was brought on by an overdose of drugs. Necrosis of liver is possible due to infections such as Hepatitis A, C or due to anti-TB drugs.

According to them such a feat was rare and only four such transplants were reported world over. The hospital was the first to perform a live liver transplant in a COVID-19 positive patient, they added.

Senior consultant anaesthetists Dinesh Babu and Nivesh said they used a scavenging system for airflow from the ventilators besides hepa filters to keep the air clean in the ICU and the operation theatres.