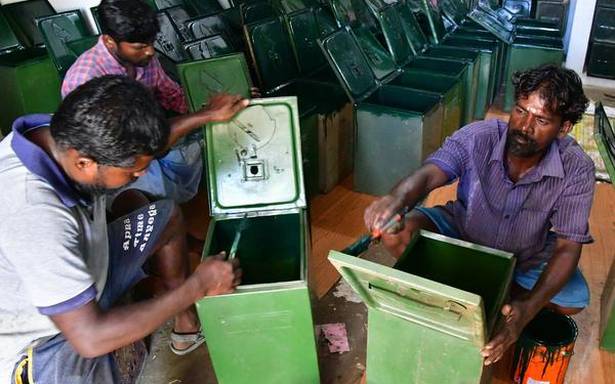 The Madras High Court on Friday recorded the submission of Advocate General (A-G) R. Shunmugasundaram that continuous video recording would be ensured in as many polling booths as possible during the local body polls to be held in the nine newly-created districts this month.

Chief Justice Sanjib Banerjee and Justice P.D. Audikesavalu recorded the submission made during the hearing of a writ petition filed by the AIADMK seeking elaborate security measures to ensure the purity of the electoral process.

Former Advocate General Vijay Narayan, representing the AIADMK, said the Tamil Nadu State Election Commission had decided to install CCTV coverage in only 20% of the booths and record only critical events. He insisted that there should be 100% continuous video coverage in all booths.

Stating that what could be a critical event and what could not be would be left to the subjective satisfaction of the officials concerned, he said, with the technology available at present, it should not be a herculean task to ensure continuous video recording in all booths.

The court also recorded the A-G’s submission that observers would be appointed at the block level instead of the present plan to appoint only one IAS officer as an observer for each of the nine districts. During arguments, Mr. Narayan had contended that one officer might not be able to cover an entire district.

The judges agreed with him that district-level observers would not be able to visit every other spot in case of complaints of irregularities. Immediately, the A-G agreed that observers shall be appointed at the block level to ensure an effective grievance redressal mechanism.

The judges, however, rejected the plea to make public the names of micro observers after Mr. Shunmugasundaram said those officials were supposed to operate in secrecy. He said the micro observers take videos and photos of irregularities and submit them to the observers.

After commending the gracious manner in which the incumbent A-G and the former A-G had conducted the present case, the judges hoped that the local body polls would also take place in the same spirit.