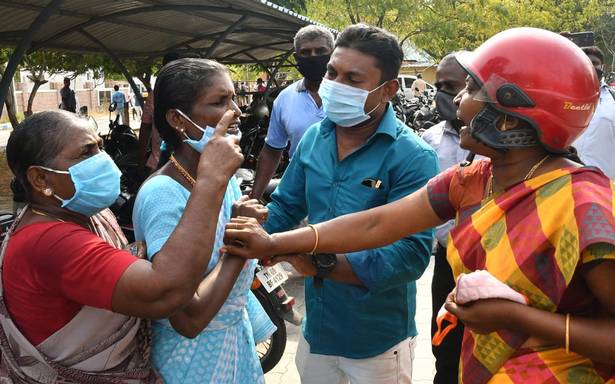 Protesters heckle those in favour of revival at public hearing .

At a hurriedly convened closed-door public hearing in Thoothukudi on April 23, a cross-section of local people opposed any move to allow Vedanta’s sealed Sterlite Copper plant to resume operations to produce oxygen to meet the pressing medical need in many parts of the country following the COVID-19 outbreak.

Those opposing the revival of operations also heckled and chased away some of those who supported Vedanta.

The copper smelter unit at SIPCOT Industrial Complex has remained idle after it was closed in May 2018 after 13 anti-Sterlite protesters were killed in a police firing.

Sterlite Copper chief executive officer Pankaj Kumar had submitted an appeal to the State government seeking permission to operate its oxygen plant alone at the copper smelter complex to supply 1,050 tonnes of oxygen per day to hospitals, which are facing a shortage of the gas. The company also moved the Supreme Court with its offer.

On April 22, the Central government supported the company, while Tamil Nadu opposed it. The State government had asked the Thoothukudi administration to conduct a public hearing on the issue and send its report on April 23 to enable it to submit an affidavit before the Supreme Court.

The district administration had invited select people – both in favour of and against the move to resume operations for oxygen production – for the public hearing at the Collectorate. As people protested against restricting the number of invitees, eventually about 50 were allowed to attend the public hearing chaired by Collector K. Senthil Raj.

Journalists were asked to leave within minutes of the commencement of the hearing that ended within 30 minutes. The Collector did not brief journalists as he rushed to prepare his report to be sent to the State government.

It is learnt that there were heated arguments between two groups of participants at the public hearing. The Collector and Superintendent of Police S. Jayakumar pacified them. A majority of the participants had opposed Sterlite’s plea for resumption of operations. They told journalists that there was no dearth of medical oxygen in Tamil Nadu and that the plant must remain closed. They feared that allowing operations could eventually lead to full-scale resumption of activities at Sterlite Copper in the future.

Earlier, outside the Collectorate, those opposing the company verbally abused a group of supporters of the copper smelter unit. Some of them chased the plant’s supporters away, hurling stones at them. However, no one was injured.

After the meeting, when a woman supporter of the plant was taking her two-wheeler out of the parking lot, two women affiliated to the protest group abused her and one of them slapped her. A few men there too abused her as she left hurriedly.

Stones were also hurled on vehicles of those in favour of Sterlite, but no vehicle was damaged.