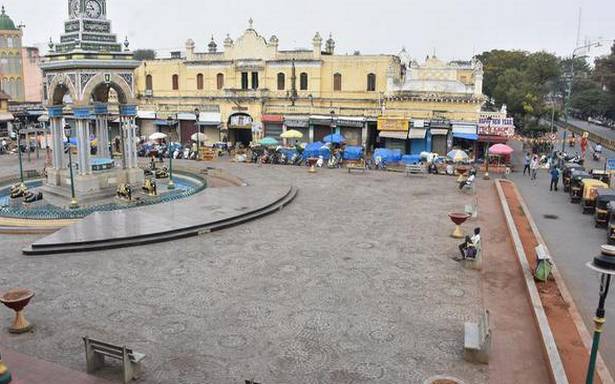 The second day of the weekend curfew in Mysuru and surrounding regions saw commercial and industrial establishments remaining closed with people by and large complying with the government directives.

Markets remained shut while public transport system had a skeletal presence. As announced by the government only establishments coming under essential category such as pharmaceutical and grocery shops, hospitals and clinics, milk parlours, etc., were open and other offices were shut. Though it was a Sunday and markets tends to be flooded during evening, it was not the case and people stayed indoors or preferred to go out only in case of a dire need.

Meanwhile, there is growing opposition to the weekend curfew and the decision has come under flak again from a section of the stakeholders on its efficacy in preventing the spread of the pandemic.

Sudhakar Shetty of the Federation of Karnataka Chamber of Commerce and Industry appealed to the government to rescind the order on weekend curfews though he wanted curbs to be in place for jathras, festivals and mass gathering of people.

The State exchequer will also be affected by such frequent closures to businesses and industries, he said and suggested that it be revoked and instead called for crackdown on public functions and mass gatherings besides ensuring that wearing masks and use of sanitizers were compulsory. ‘’We have witnessed how mass gatherings led to surge in the COVID-19 cases during the first and the second wave’’, said Mr. Shetty. He also called for curbs on political gatherings.

The small-scale industrial units were also put to hardship because of the weekend curfew and the sector was barely recovering from the first two waves of the pandemic. The SSIs are the largest employment generators in the country and the weekend curfew will have a bearing on their capacity to pay the workers which will have a cascading negative impact on the economy, according to Mr. Shetty. Similar views were expressed by stakeholders in the tourism and hospitality sector who wanted the weekend curfew orders to be rescinded from next week.