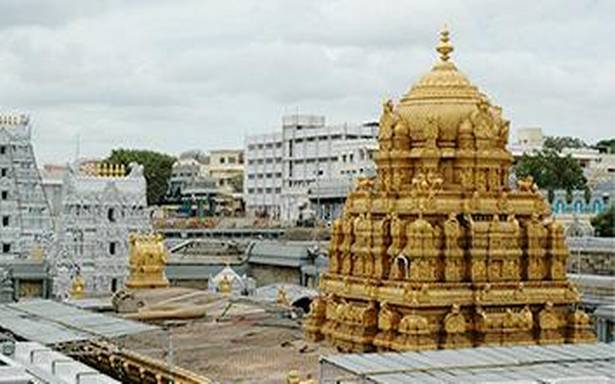 Tirumala: The temple of Lord Venkateswara has been registering thin crowds since the second week of April.

The turnout of pilgrims which hovered around 50,000 devotees a day till the first half of the month plummeted to little over 20,000 pilgrims with the annulling of Sarva darshanam from April 12 — a decision that was taken to curb the spread of the second wave of COVID-19.

According to statistics the temple had experienced footfalls exceeding 20,000 only on five days in the last fortnight. On all the rest eleven days the crowd stood well below the mark. The fact that the temple had registered a crowd of about 9,640 and 6,431 pilgrims on April 29th and 30th speaks about the diluted situation.

Reasons for the sudden decline in the pilgrim crowd are attributed to the slashing down of the darshan tokens in the last week of March from 30,000 to 15,000 a day followed by its annulment thereafter.

The low turnout in the footfall also directly impacted the proceeds derived from the temple hundi which is the main source of income for the institution.

The hundi income which gradually shot up to ₹80 to 85 crore a month in the aftermath of the five phased unlock process announced by the central government took a plunge and stood around ₹2 crore a day since the second week of April.

Statistics authenticate that the hundi income did not exceed ₹2 crore mark for about eleven days in the last fortnight. It even failed to register Rs. 1 crore mark on three days besides netting an all time low of ₹62 lakhs on April 29.

While things stood such, the TTD further brought down the issuance of ₹300 special entry on line darshan tickets from 30,000 to 15,000 tickets a day starting from May 1st amid fears of second wave of the pandemic engulfing the country. The irony is that the darshan tickets which generally evaporated within a couple of days of their release surprisingly are still available in ample number on most of the days during the current month.

Officials who wished not to be quoted expressed their concern over the steep surge in the positive cases across the country and feared that the financial position of the institution which was just limping back to normalcy will be again at stake should the situation escalate further.