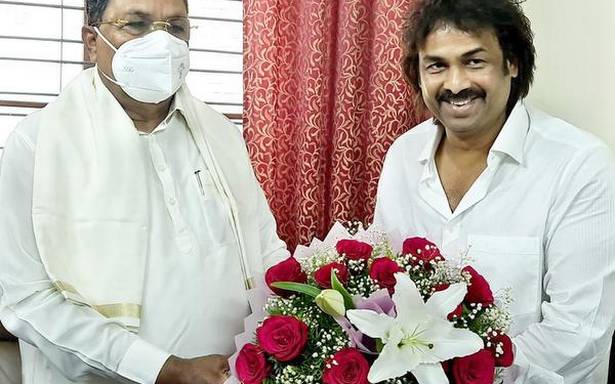 Madhu Bangarappa, former JD(S) MLA and son of former Chief Minister the late S. Bangarappa, on Thursday announced that he would be joining the Congress, stating that there is much scope for him to work and express his views in the party.

Setting aside all speculations, Mr. Madhu called on former Chief Minister Siddaramaiah at the latter’s residence and announced that he was joining the Congress.

Mr. Madhu was defeated by his brother Kumara Bangarappa (BJP) in Soraba constituency in the 2018 Assembly polls. He also contested the 2018 Lok Sabha bypolls on JD(S) ticket and lost to the BJP.

“All my supporters have taken the decision. I am joining the Congress,” he said. Mr. Madhu said his father became the State’s Chief Minister while in Congress.Regarding reasons for leaving the JD(S), Mr. Madhu said he had explained his problems to JD(S) leader H.D. Kumaraswamy on many occasions. He is expected to call on KPCC president D.K. Shivakumar on Friday.

On Tuesday, Ashok Managuli, son of former Minister and JD(S) leader the late C. Managuli, had joined the Congress. He is likely to be the candidate of the party in the bypolls to the Sindagi constituency in Vijayapura district.

Bypolls were necessitated following the death of two-time MLA and former minister C Managuli, who died due to COVID-19 complications.