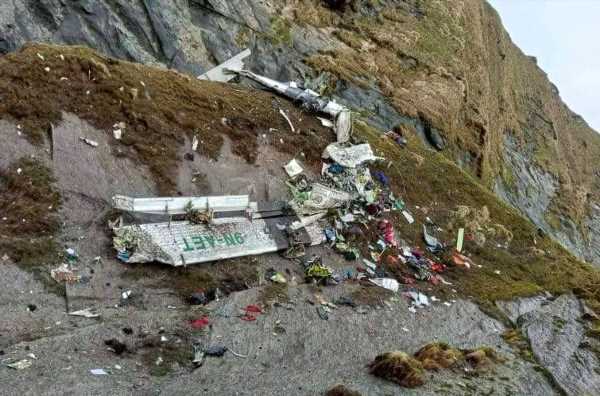 The bodies of four Indians, who were among 22 people killed in the Tara Air plane crash in Nepal’s mountainous Mustang district, were cremated on Thursday at the sacred Pashupatinath temple in Kathmandu.

The Canadian-built turboprop Twin Otter 9N-AET plane was carrying four Indians, two Germans and 13 Nepali passengers, besides a three-member Nepali crew when it crashed minutes after taking off from the tourist city of Pokhara on Sunday.

Businessman Ashok Kumar Tripathi, 54, and his Thane-based estranged wife Vaibhavi Bandekar Tripathi, 51, were on a reunion trip to the Himalayan country along with their son Dhanush, 22, and daughter Ritika, 15, when the tragedy struck.

Tripathi’s brother and wife were present when the last rites of the four members of the family were performed.

The bodies were cremated at the electric crematorium near the temple.

The Pashupatinath Temple in Kathmandu, situated along the banks of the Bagmati River, is one of the most important Hindu temples in Nepal.

Earlier in the morning, the bodies were handed over to the family after post-mortem at the Tribhuvan University Teaching Hospital in Kathmandu.

The Nepal government has formed a five-member commission of inquiry headed by senior aeronautical engineer Ratish Chandra Lal Suman to find out the cause of the Tara Air plane crash.

According to a preliminary investigation carried out by the Civil Aviation Authority of Nepal (CAAN), bad weather was the reason behind the crash of the plane.

The black box of the plane was also retrieved by a team of experienced international and national mountain guides from the crash site on Tuesday.

The black box, also known as the cockpit voice recorder, records radio transmissions and other sounds in the cockpit, such as conversations between the pilots, and engine noises.

It could offer vital clues about the crash in which all 22 people on board were killed.