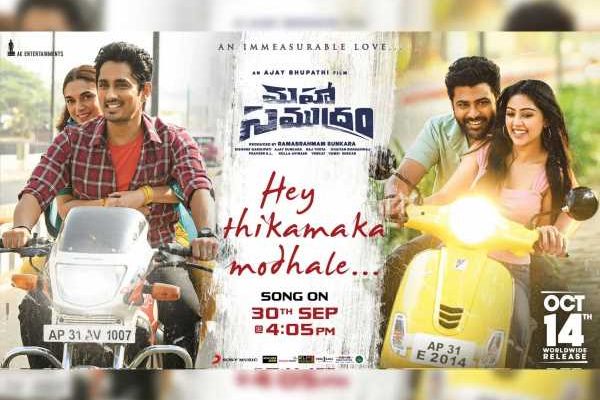 The action and romantic drama Maha Samudram starring Sharwanand and Siddharth, is one of the most awaited films of this year, which is helmed by RX 100 fame director Ajay Bhupathi and is backed by AK Entertainments.   This film marks the come back of Siddharth in Tollywood.    In Telugu film Industry, he was last seen playing cameo in Baadshah.  The much hyped movie has two actresses Aditi Rao Hydari and Anu Emmanuel in the female leads.

Maha Samudram has the music by Chaitan Bharadwaj and the makers have kick-started the musical promotions. They have already released the two songs which generated good buzz and now the team of Maha Samudram have decided to release the lyrical video of third song Hey Thikamaka Modhale, which will be released tomorrow at 4:05 pm. The makers confirmed the same by releasing a new poster on Twitter.

The team of Maha Samudram are now coming up with a Beautiful duet by Chaitan Bharadwaj.

Sharwanand and Siddharth starrer Maha Samudram has wrapped up its shoot recently and post-production works are going on at the brisk pace.  The action thriller drama  Maha Samudram is getting ready for its theatrical release.  The movie is slated to hit the theaters on 14th October Worldwide.

Raj Thota is the cinematographer  of Ajay Bhupathi film Maha Samduram and Praveen is the editor of the film.