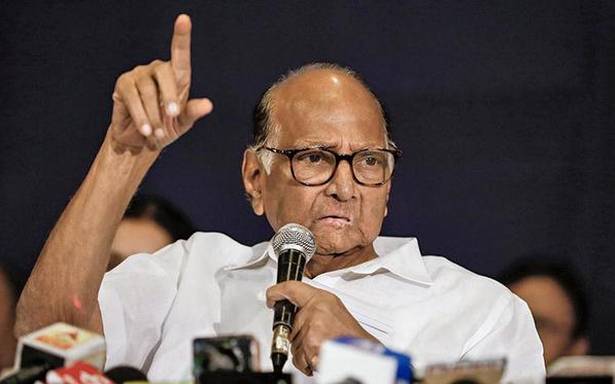 “The Shiv Sena is a party you can trust. Balasaheb Thackeray honoured his commitment to Indira Gandhi,” NCP chief Sharad Pawar said on 22nd foundation day of the party

NCP president Sharad Pawar on June 10 said the Maha Vikas Aghadi (MVA) government in Maharashtra will complete its full term and praised ally Shiv Sena, saying it is party which one can trust.

The remarks came against the backdrop of the one-on-one meeting between Maharashtra Chief Minister Uddhav Thackeray and Prime Minister Narendra Modi in Delhi on June 8 and Mr. Pawar’s meeting with BJP leader and former CM Devendra Fadnavis last week.

Speaking on the 22nd foundation day of the NCP, Mr. Pawar also said the MVA (comprising the Shiv Sena, the NCP and the Congress) will do well in the next Assembly and Lok Sabha elections, indicating the three parties may contest the 2024 polls together.

He said doubts are being raised as to how long the State government will last.

"But, the Shiv Sena is a party which can be trusted. The government will last its full term and also perform well in the next Lok Sabha and Assembly polls," the NCP chief said.

"The Shiv Sena is a party you can trust. [Sena founder] Balasaheb Thackeray honoured his commitment to Indira Gandhi," he said.

The Shiv Sena, the NCP and the Congress came together to form government in Maharashtra following the Assembly polls in 2019, after the Uddhav Thackeray-led party had a fallout with the BJP over the issue of sharing the chief ministerial post.

"We have formed a government comprising parties of different ideologies. We never thought we will one day form government with the Shiv Sena because we had never worked together. But, the experience is good as all the three parties are working well together during the COVID-19 pandemic," Mr. Pawar said.