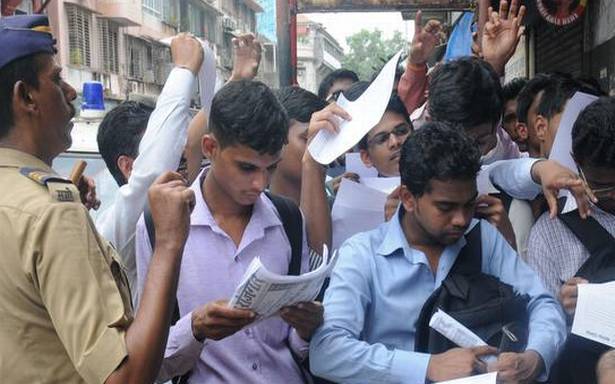 State govt. blames firm it had outsourced arrangements to

In a major embarrassment for the Maharashtra government, recruitment examination for 6,200 posts in the Public Health Department had to be postponed on Friday night. The exam was scheduled on Saturday for which over six lakh applicants had enrolled.

The State government claimed that the company to whom the responsibility of making necessary arrangements was outsourced, was unable to fulfill the duty. As per the schedule, on September 25 and 26, examination for the Group C and Group D posts were to be held respectively.

The Opposition and student bodies slammed the State government over its carelessness and appointing a company which was already blacklisted demanding inquiry and action against officials involved.

According to the statement issued by the State’s Public Health Department, the next date of the examination will be announced only after fulfilling all the technical requirements.

“The examinations are being postponed because outsourced company Nyasa Communications Pvt. Ltd. could not make the necessary arrangements for the exams in due time,” it said. State’s Public Health Minister Rajesh Tope apologised to the students and their families for the trouble.

“The Health Department extended all necessary cooperation to conduct the exam to the company. Despite all the cooperation and help, the company conveyed on September 24 at 7 p.m. that it could not finish preparations of providing hall tickets and making seating arrangements,” the statement said.

As per the company’s agreement with the State government, the Health Department was to provide question papers; rest of the arrangements, including designing website, online applications, provide hall ticket, make sitting arrangements and publish merit list was to be done by the said company.

Leader of the Opposition Devendra Fadnavis demanded inquiry into the incident alleging middlemen having infiltrated the system leading to its collapse. “The State government cannot do away with its responsibility. It cannot do a single work properly. It messes everything that it touches,” he said.