"If the BJP was so confident of getting 220 seats, why is it organising 10 rallies by Prime Minister Narendra Modi, 20 by Union Home Minister Amit Shah and 100 rallies by the CM? Sena chief Uddhav Thackeray is also holding rallies…" says Ajit Pawar. 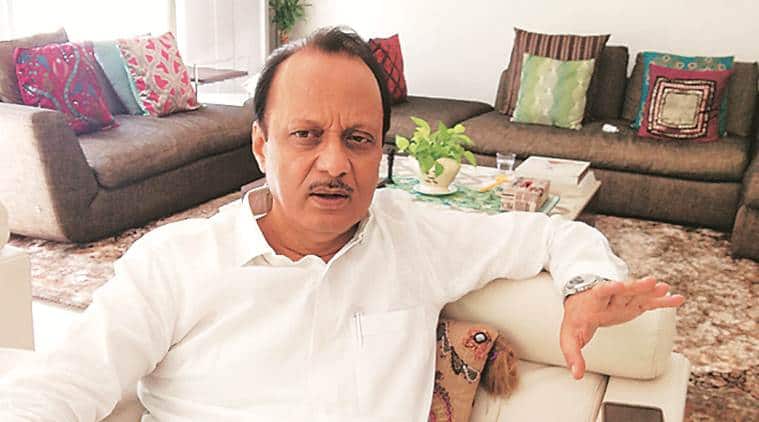 NCP leader Ajit Pawar speaks to The Indian Express about his party’s prospects in the polls, his resignation as MLA and the corruption charges leveled against him and party chief Sharad Pawar in the Maharashtra Cooperative Bank scam.

You have said Chief Minister Devendra Fadnavis has told you in private about his plan for a separate Vidarbha. Was the CM serious about it?

Devendra Fadnavis had told me about his intention of pushing for a Vidharbha state after completing four-and-a-half years in office. We spoke immediately after the 2014 elections. However, I think he and the BJP later gave up the idea and started harping on the development plank. At this juncture, I don’t want to unnecessary rake up the issue and create confusion. I will speak about it at an appropriate moment.

Congress state chief Balasaheb Thorat has predicted that Congress-NCP alliance will get 160 seats.

The kind of response we are getting shows that the Congress-NCP are on top of voters’ minds. The failure of this government in living up to people’s expectations has generated anger. I agree with Balasaheb Thorat’s figure. But I think we will get 175 seats because we have sponsored at least 10 candidates and are also getting support from MNS.

The BJP is claiming that it will get 220 seats and Congress-NCP will not even get 10 per cent seats required to get the Opposition status?

If the BJP was so confident of getting 220 seats, why is it organising 10 rallies by Prime Minister Narendra Modi, 20 by Union Home Minister Amit Shah and 100 rallies by the CM? Sena chief Uddhav Thackeray is also holding rallies. The BJP and the Sena also undertook yatras across the state… They are not confident of even returning to power.

Is the BJP making claims because of its loss in Rajasthan and Madhya Pradesh polls?

They are afraid of losing. The BJP and Sena know they have performed below par and are thus taking out yatras, making false claims, hurling allegations… Their manifestos also don’t match.

BJP has made Article 370 its main election plank. How are you countering this?

This is a state election. So instead of Article 370, the Fadnavis government should talk about what it has done for Maharashtra. Here, development, industrial growth, price rise, condition of roads, drinking water and sanitation, farmer suicides and loans, crime and employment matter and not Article 370. We are taking these issues to the voters… The government has done nothing in the last five years other than making tall claims and parading lies.

Why do you say the government has failed on all fronts?

It has been a big zero on the development front. Ordinary people have been hit by inflation and joblessness. Small traders, industrialists, shopkeepers, builders, farmers and others have endured a nightmare these five years. Not a single new industrial unit has come up and many have closed down. The government had promised to recruit around 72,000 youths. Where are these jobs? They also promised recruitment in the police. Industrial growth has stagnated, no investments are coming in, ‘Make in India’ initiative has gone for a toss…

Was this government free of corruption? You do not raise this issue.

Not true. At a rally on Friday, our party chief Sharad Pawar raised the issue of corruption by the state government. Inside and outside the legislature, leaders like Dhananjay Munde, Jayant Patil and myself have raised the issue. We had given the government a list of 22 ministers who we found indulging in irregularities. The government has initiated no action.

You have said that you opposed the arrest of Balasaheb Thackeray in 2000?

It happened when I was a first-term MLA. I had opposed the arrest of Shiv Sena chief Balasaheb Thackeray, which I thought was unwarranted. My then seniors had said that they will do what they think is right. I feel we should not practise politics of vendetta, like being pursued by the current regime.

The irrigation scam keeps cropping up.

You resigned as a MLA after being booked by the ED in regard to the Maharashtra Cooperative Bank scam and broke down at a press conference.

When a leader like Sharad Pawar is being dragged unnecessarily in the so-called scam, one is bound to get emotional. Pawarsaheb had no role in the bank, yet his name came up… This is politics of vengeance. The bank has a deposit of Rs 11,000 crore and they are alleging that it is a Rs 25,000-crore scam. The bank has even earned a profit of Rs 252 crore, which means all was well.

While joining the BJP, former NCP MP Udayanraje Bhosale claimed all his proposals were dumped during the NCP regime?

There is no truth in this… Ask Udayanraje which of his proposals were not taken up.

Rohit has worked hard in his constituency of Karjat-Jamkhed. He is drawing overwhelming response. We are confident he will do well.

How do you assess your prospects in Baramati?