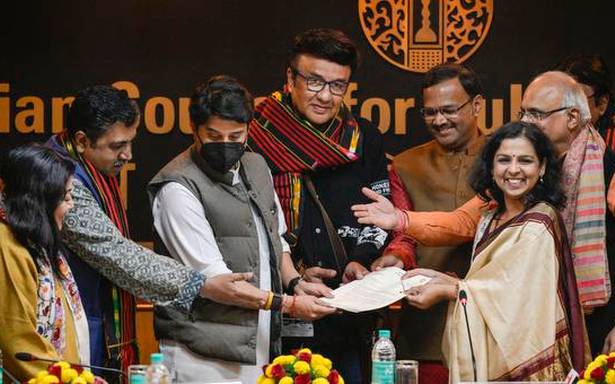 Let’s make it mandatory to play Indian music on flights operated by Indian airlines as well as at airports; such a seemingly small step might go a long way in strengthening our people’s emotional connect with the country’s traditions, according to the Indian Council for Cultural Relations (ICCR) and musicians.

This is the demand put forward by the ICCR along with various musicians and singers to Civil Aviation Minister Jyotiraditya Scindia on Thursday.

In this regard, a letter was handed over to the Minister by ICCR president Vinay Sahasrabuddhe and others at a meeting held at ICCR premises in the national capital.

"… playing Indian classical or light vocal and instrumental music in aircraft being operated in India and also at various airports be made mandatory for all India-based airlines," the letter said.

Mr. Sahasrabuddhe said the Minister has agreed to look into the matter and think about the demand sympathetically. "We have just given voice to what was in the minds of people," he added.

Mr. Scindia, who spoke after receiving the letter, did not specifically mention the proposal.

India has an ancient tradition of music and that the country in a way is an incubator in the field of music for the world, he said, adding that in the race for modernisation, the ancient tradition might not have got the required encouragement.

The Minister also suggested having music festivals like literature festivals to promote music.

About the proposal for playing music Indian music on Indian flights, singer and music director Kaushal Inamdar said the whole idea is not only about promoting music but also Indianness.

"Music has the power to evoke emotions. That is why we should play Indian music in our land, in aircraft, because it (Indian music) is one of the best ambassadors for our country," he emphasised.

On making the request to the Minister, Mr. Inamdar said "if you speak about it, at least the possibility comes into existence".

Music composer Anu Malik said it is a fabulous idea.

Vocalist Manjusha Patil Kulkarni said whether it is classical or instrumental or any other form, every airline in India should be playing Indian music.

"It is our considered opinion that this seemingly small change shall go a long way in strengthening the emotional connect of our people to our civilisational traditions in music and arts for music is a language that never fails to strike a chord," the letter said.