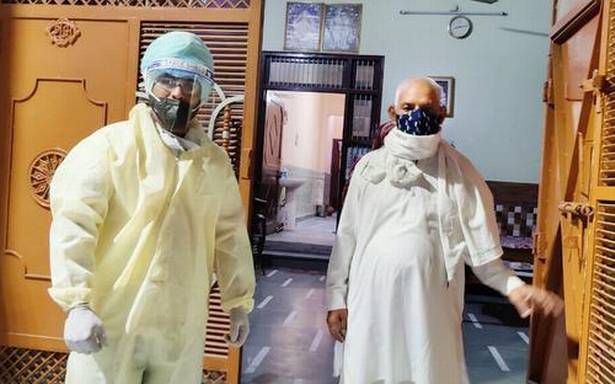 The makeshift hospital at the Singhu border protest site is not only taking care of the protesting farmers but also those struggling for oxygen cylinders and ambulances in Delhi-NCR.

Avtar Singh, who runs Life Care Foundation Hospital, recalled an incident about three days ago. With profound grief, he said that an eight-month pregnant COVID positive woman, with her husband, came seeking help in the hope that the hospital could treat COVID-19 patients. Unable to do so, the hospital could only provide her with an ambulance.

“Her husband said that they were unable to arrange an ambulance to go looking for a hospital as her oxygen level was dropping. We then provided them with our ambulance which is fitted with oxygen cylinder and told them that they could keep it for as much time they required,” he said.

Unfortunately, the woman couldn’t find a hospital for a long time and when she did, ahead of Karnal, she succumbed in two hours, Mr. Singh said.

We receive several SOS calls from the neighbouring Singhu village as well, said Mr. Singh. The hospital has been able to provide oxygen to those in need after thorough verification. “When we receive these calls, we don’t take the patient’s word for it. We tell the family to show us the patient on video call first and check their oxygen levels after which the cylinder is provided,” he said.

On Saturday, Mr. Singh said that they received a call from a family of a 40-year-old resident of Singhu village that his oxygen levels were dropping and they needed a cylinder urgently. “We verified the information and provided the family with an oxygen cylinder. The person’s oxygen levels had dropped to 70,” he said. The team at the hospital also checks on the patient regularly and guides them as to when should they look for a hospital.

According to Mr. Singh, those residing in the village find it tougher to arrange a hospital bed or oxygen because they’re live on the city outskirts.

The protest, he claimed was continuing and many protesters are now taking the COVID-19 situation seriously as opposed to what how they believed initially when the protest started in November. “Locals like labourers, workers and street vendors are asked to wear a mask strictly because they don’t lodge here,” he said.