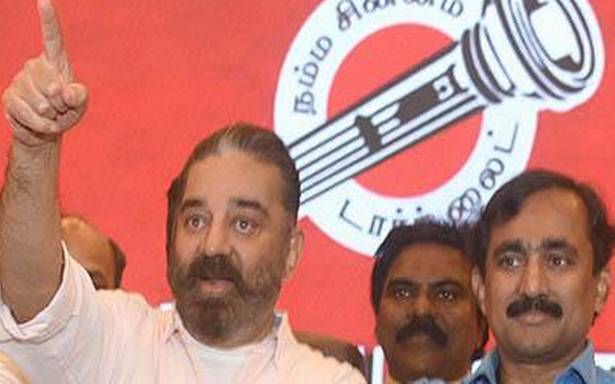 Kamal prolongs suspense over his seat

Makkal Needhi Maiam (MNM) founder Kamal Haasan on Wednesday released a list of 70 candidates who will contest in the Assembly election on the party’s ‘Battery Torch’ symbol.

While Mr. Haasan prolonged the suspense over the constituency from where he would seek election, he said the party’s star candidates — vice-president V. Ponraj, former IAS officer Santhosh Babu, lyricist Snehan and 25-year-old environmental activist Padmapriya — will contest from Anna Nagar, Villivakkam, Virugambakkam and Maduravoyal.

An office-bearer said the party had tried to ensure adequate representation to religious and linguistic minorities and women.

The constituency of the other vice-president, R. Mahendran, who polled close to 1.3 lakh votes in the Coimbatore Lok Sabha constituency, is also likely to be announced, along with those of entrepreneur C.K. Kumaravel, actor Sripriya, Kameela Nasser and Mr. Haasan himself.