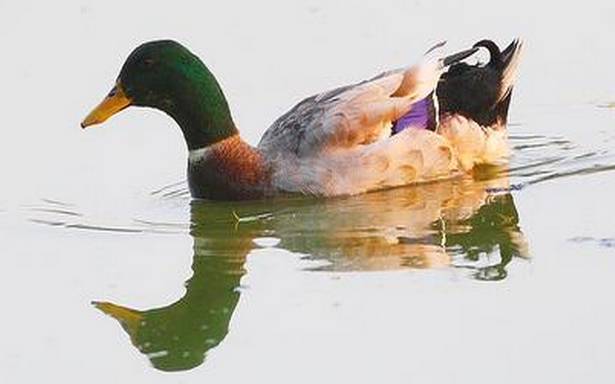 Rashmitha T Juvvadi, Pranay S Juvvadi, Ismail Shariff and Jitender Kumar Soni who were on a recreational walk at Sanjeeviah Park on Tank Bund on Friday morning were in for a surprise when Ismail alerted the group that he had spotted a Mallard.

The Himalayan Mallard belongs to the duck family and is commonly seen in the colder regions of north India but not seen in the western and southern regions of the country. While a few rare sightings have been recorded in the western belt of Maharashtra, there is no recorded sighting to date in Telangana. Scientifically known as Anas Platyrhynchos, and commonly called the wild duck, the Mallard belongs to the duck family but has a most distinctive feature in the iridescent green or blue-headed plumage of the male.

The Mallard is a dabbling duck that feeds on all aquatic plants and vegetation near the surface of the water as well as insects and snails. Mallards are domesticated and are commonly-reared pets in areas where they are easily found and are reared for food.

Hyderabad-based raptor expert Pranay S Juvvadi says that when Ismail alerted them about the bird, they rushed to see, and found it swimming with the local spot-billed birds. Discussing the possibilities of how the bird landed in Hyderabad Pranay says “Occasionally they stray in with other flocks and travel without their own group. This bird too must have landed in the city similarly. We usually go on walks to Sanjeevaiah Park to record bird sightings and Friday happened to be one such day.”

He adds that Sanjeeviah Park’s unique combination of vegetation and waterfront makes it a suitable spot for migratory birds. Last year, another bird ‘Common Shelduck’ too was spotted at the Park.