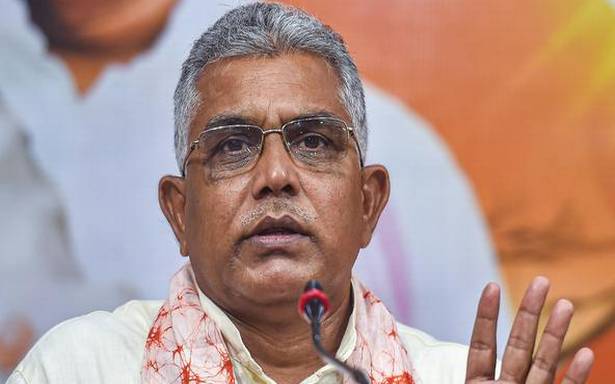 Mr. Ghosh shared a poster saying: The honourable person is uttering the Bangladeshi slogan Jai Bangla which is the national slogan of Islamic Bangladesh.

Mr. Ghosh shared a poster on his official Facebook account where an image of Ms. Banerjee is shown with the caption – “The honourable person is uttering the Bangladeshi slogan Jai Bangla which is the national slogan of Islamic Bangladesh. She is fighting with the objective of a Greater Bangladesh,” the post said.

The Chief Minister on January 23 declined to speak at an event to celebrate Netaji Subhas Chandra Bose’s birth anniversary where “Jai Shri Ram” slogans were raised in the presence of Prime Minister Narendra Modi.

Ms. Banerjee had not started her speech when the slogan was raised by a section of the crowd at the Victoria Memorial event to celebrate the 125th birth anniversary of the freedom fighter.

“This is a government programme and not a political programme. There has to be dignity. It doesn’t behove anybody to invite people and insult. I won’t speak. Jai Bangla, Jai Hind,” she had said, wrapping up.

Strongly reacting to Mr. Ghosh’s Facebook post, TMC MP Sougata Roy described it as “not worthy of response”. “It is condemnable that the BJP is trying to import its divisive communal brand of politics to Bengal,” Mr. Roy added.

TMC spokesman Kunal Ghosh said, “Ghosh has forgotten that the BJP has increased its number by inducting former TMC members which shows the bankruptcy of the saffron party”.