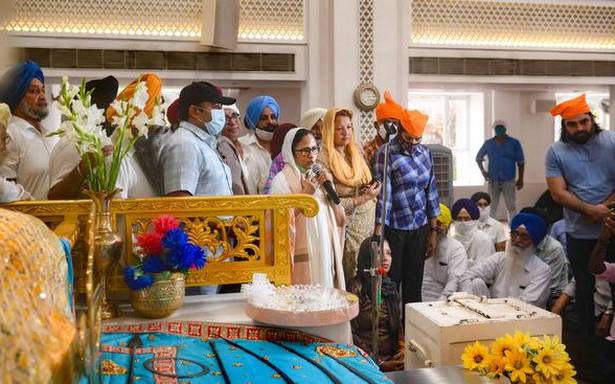 Bahabnipur, from where she was elected in 2011 and 2016, has voters from different communities- Bengali, Gujaratis, Sikhs and Hindi-speaking

West Bengal Chief Minister Mamata Banerjee on Wednesday visited Gurudwara Sant Kutiya in the Bhabanipur Assembly seat, from where she is seeking election, and expressed full support to the farmers who are protesting against the Central farm laws. She demanded the withdrawal of the laws.

“I am here to take the blessings from you all. I have been here several times to seek blessings and whenever I have free time, I try to visit the gurdwara,” the Trinamool Congress chairperson stated.

The Chief Minister, who was seen inside the gurdwara with her head covered by a cloth, also said she was fond of the gurdwara’s halwa.

On Thursday she is scheduled to meet people of the Hindi-speaking community.

Bahabnipur, from where she was elected in 2011 and 2016, has voters from different communities- Bengali, Gujaratis, Sikhs and Hindi-speaking.

BJP candidate from Bhabanipur Priyanka Tibrewal, during her campaign in the constituency in the day, had to face Trinamool Congress supporters who raised “Joy Bangla’ and “Mamata Banerjee Jindabaad” slogans.

The constituency, along with Jangipur and Samserganj, will go to the polls on September 30.

A BJP delegation has submitted a letter to the Election Commission of India (ECI) demanding that more Central armed police forces (CAPF) be sent for the bypolls.

“The CAPF deployment of only15 coys per AC have been sent, this is grossly inadequate, especially in 159 AC Bhabanipur where the unelected Chief Minister Smt. Mamata Banerjee is contesting for survival. AITC has deployed their entire strength of hooligans, “ the letter said.

CAPF personnel have already arrived in Bhabanipur and conducted a route march.

The letter alleged that “Firhad Hakim, Senior Minister and Chairman of the Board of Administration Kolkata Municipal Corporation, had attempted to incite communal violence”. The BJP leaders also demanded that no “State Government / municipal employees, including teachers, should be used as polling officers and sector in charges”.