Biren Singh asserted that the present government emerged as a “citizen-centric” owing to state’s constant effort to connect with the people by understanding their grievances and respecting their sentiment. 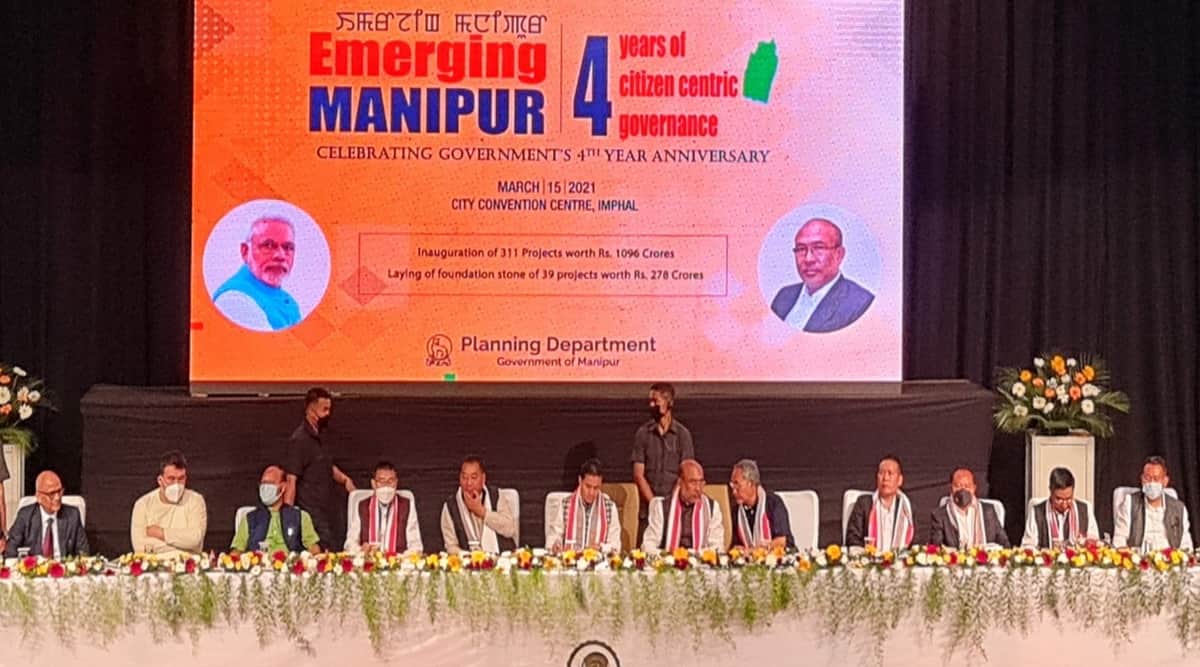 Manipur Chief Minister N Biren Singh on Monday inaugurated as many as 311 projects worth Rs. 1096.05 crores and laid the foundation stone of 39 new projects estimated Rs. 278.77 crores to mark the successful completion of four years of the BJP-led coalition in the state.

The inauguration and laying of foundation stones was carried out in a grand event organised at the City Convention Centre, Imphal titled ‘Emerging Manipur – Celebration of 4 years of Achievement’.

The Chief Minister attributed the achievements to unstinting support of the Central Government led by Prime Minister Narendra Modi and co-operation from the people of Manipur.

The people of Manipur are indebted to the Central Government for implementing Inner Line Permit System in the State, he said.

N Biren Singh asserted that the present government emerged as a “citizen-centric” owing to state’s constant effort to connect with the people by understanding their grievances and respecting their sentiment.

Highlighting some of the important achievements, Singh said they could bring governance close to the public through monthly interactions of ‘Meeyamgi Numit’ and ‘Hill Leaders’ Day’.

Singh claimed that he personally met around 40,000 people to attend to their grievances in a span of around three years before COVID-19 pandemic. Of this, around 17,000 grievances were disposed, added Singh.

Under the ‘Go to Hills Mission’, various infrastructure developments had taken place in the hills bridging the hill-valley gap and bringing emotional integrity, he asserted. Moreover, he said, ‘Go to Village’ took the governance to people’s doorsteps covering 2,691 villages less than one year.

People to people contact was enhanced with the revival of Manipur State Transport after a gap of 15 years and bus services between Imphal and various hill destinations started, he added.

With the setting up of Anti-Corruption Cell, more than 300 corruption-related cases were taken up and more than 30 Government officials punished, he informed. ‘War on Drugs’ campaign was initiated towards bringing a drug-free society, and it has now become a people’s campaign with people from all walks of life supporting it. Law and order has also improved considerably and police-people relation is also getting better, he added.

Video presentation and photo exhibition on Government’s achievements and launching of State-focus paper on developmental works to be taken up with the assistance from NABARD during 2021-22 were the main highlights of the celebration among others.