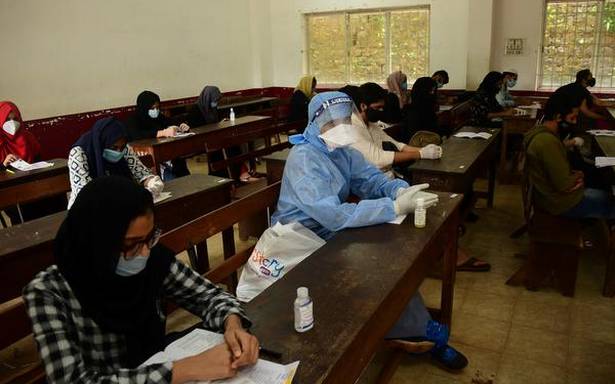 Several students have joined a campaign in Twitter with the hashtag #Canceluniversityexams. The exams are scheduled to begin offline from June 28

A section of students in Kerala has stepped up their demand for cancelling the final-semester university examinations scheduled to begin offline from June 28 onwards.

Many students have joined a campaign in Twitter with the hashtag #Canceluniversityexams. They are asking the authorities to either cancel the tests or ensure vaccination of all aspirants before holding the offline exams.

The Kerala government had given its nod for the universities in the State to hold the final-semester exams offline as part of the partial relaxations that came into effect last week. The exams were postponed twice after the second wave of the COVID-19 pandemic.

However, the students pointed out that the pandemic situation had triggered several emotional issues among the students and the best option to assuage their distress was to cancel the offline exams.

Students who spoke on the social media platforms stated that many among them have not even received the first dose of vaccine. With the possibilities of a third wave round the corner, hundreds of students will be exposed to the risk of the disease spread while appearing for the exams, they said.

A group of undergraduate students said that the government and the university authorities have not taken into account their mental health while insisting on holding the offline exams. Anxiety and depression figure among the mental health problems faced by many students in this pandemic situation. Students require help to overcome anxieties even as several needed counselling, they said.

However, the Higher Education Department authorities pointed out that the decision to hold the offline exams was taken on the basis of the feedback collected from the universities.

Any further delay in the conduct of the exams will affect the higher studies of thousands of students. Necessary directions have been issued to all the universities to comply with the COVID-19 protocol and safety measures while holding the offline exams, they said.