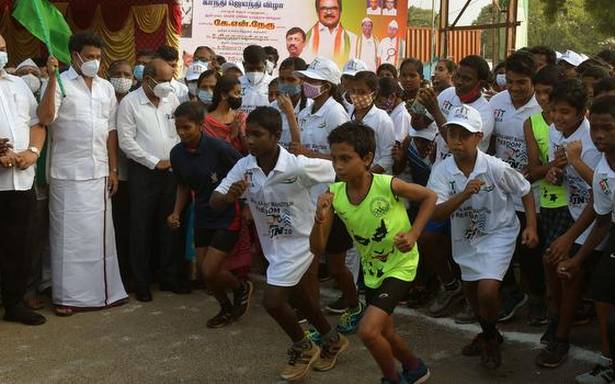 A mass yoga demonstration and a cyclothon were organised in the city to commemorate Gandhi Jayanthi and the 75th year of Independence – Azadi Ka Amrit Mahotsav.

A Fit India 2.0 marathon was flagged off from the Salt Satyagraha memorial near the Omni Bus Stand, following which a mass yoga demonstration and a cyclothon were held on Anna Nagar Link Road. Residents and walkers who exercise at the newly inaugurated park along the Uyyakondan Canal and other enthusiasts took part in the event. Minister for School Education Anbil Mahesh Poyyamozhi, Collector S. Sivarasu and Tiruchi MLA S. Inigo Irudhayaraj inaugurated the events as they remembered the father of the nation. They also garlanded the statue of Mahatma Gandhi near the Head Post Office.

To commemorate the 75th Independence day, the Ministry of Youth Affairs and Sports conducted marathons in 744 districts in the country through the Nehru Yuva Kendra and the Sports Development Authority.

The School Education Minister addressing the gathering in front of the Salt Satyagraha Memorial urged the public to dedicate 30 minutes of their day to exercise to ensure a healthy life. The participants ran the marathon from the memorial via the Tiruchi Railway Junction roundabout, Mannarpuram roundabout to the Anna Stadium. Certificates of appreciation were awarded to all participants.