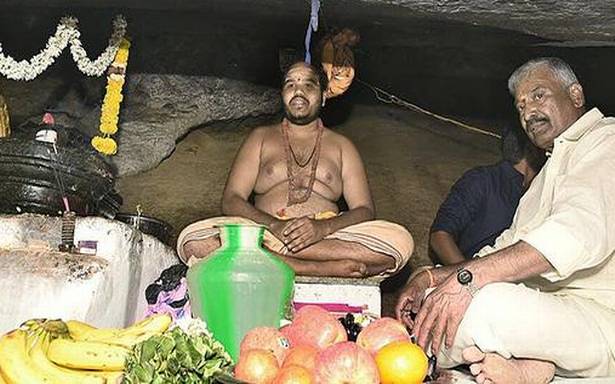 Devotees made a beeline for Siva temples across the district and offered prayers on the occasion of auspicious Maha Sivaratri on Thursday.

In view of the surge in the coronavirus cases in the recent weeks, the the temple authorities made it mandatory for the devotees to wear mask. Devotees also underwent thermal scanning before being allowed to the temple premises at many places. Tight police bandobust was in place at the Srikalahasti and the Talakona temples.

Nearly two lakh devotees had darshan of Lord Siddeswara Swamy at the famous Talakona temple in Yerravaripalem mandal. They strated arriving at the temple from the early hours of teh day. Panchayat Raj Minister P. Ramachandra Reddy presented silk vastrams to the presiding deity and offered prayers.

The Siva temple at Mallaiahkonda near Madanapalle witnessed heavy congregation of devotees from across the western mandals and the neighboring Karnataka. Devotees trekked to the hill shrines at Sadasiva Kona, Battinayya Kona and Anantarayala Konda and performed pujas.

Same was the situation at the Koti Lingala temple on the Chittoor-Karnataka border.

The Lord Pallikondeswara Swamy temple at Surutupalle, which was renovated in the 12th century, drew thousands of devotees from Chittoor, Nellore and Tamil Nadu.

Hundreds of devotees from the district went to Tiruvannamalai in Tamil Nadu to participate in the festival. Arrangements were made for distribution of anna prasadam, water and buttermilk sachets to the devotees free of cost at many temples.