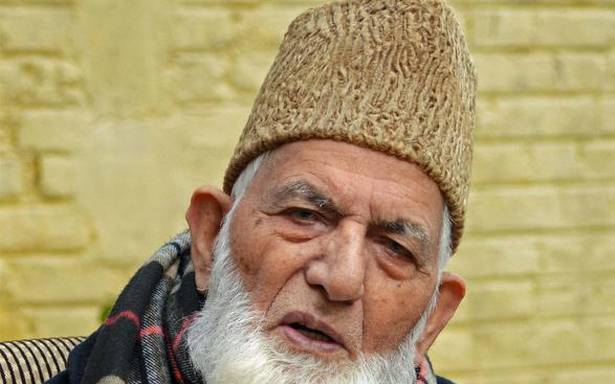 The Ministry of External Affairs (MEA) has sought an elaborate report from the J&K police on the burial of former Hurriyat chairman Syed Ali Shah Geelani, who died at 92 after a prolonged illness on September 1 in Srinagar.

A senior police official confirmed to The Hindu that a report was being prepared on the “sequence of events” between 10:30 p.m. and 5 a.m. during the night of September 1-2, the time period when the final rites of Geelani took place in Srinagar’s Hyderpora area under heavy security.

Sources said a Geneva-based rights organisation has raised the issue of Geelani’s burial with the Indian government.

According to his family, policemen barged into their house in Hyderpora and the room where Geelani’s body lay at around 2 a.m. on September 2, took away the body “forcibly” and buried it in haste “against the wishes of the family”. The family also claimed the two Geelani’s sons were not allowed to take part in the last rites, which included ablution and burial.

The family also claimed the two sons of Geelani — Naeem Geelani and Naseem Geelani — were not allowed to take part in the last rites, which included ablution and burial.

However, the police have released a series of videos that showed proper ablution and the burial of the Hurriyat leader being carried out by locals, policemen and a few relatives. There are no independent pictures of the funeral as photojournalists were barred from covering the event.

Police sources said the J&K police had prepared a ‘G-Plan’ — a burial plan for Geelani several years ago, to ensure that the funeral prayers do not turn into a major law and order situation. The police had also worked out a “security corridor” up to the graveyard.

Though the police seemed indecisive till the last moment on whether to bury Geelani at the ‘Martyrs’ Graveyard’ as per his wish or at his native place of Dooru in Sopore, Baramulla, or in Hyderpora, Srinagar, the current residence of Geelani.

Even 10 days after his death, the cemetery on the Srinagar airport road near Hyderpora continues to have heavy security deployment, with round-the-clock guard. It remains out of bounds for scribes and photojournalists. According to locals, the mosque situated adjacent to the graveyard has also been closed for Friday prayers over the last two weeks.