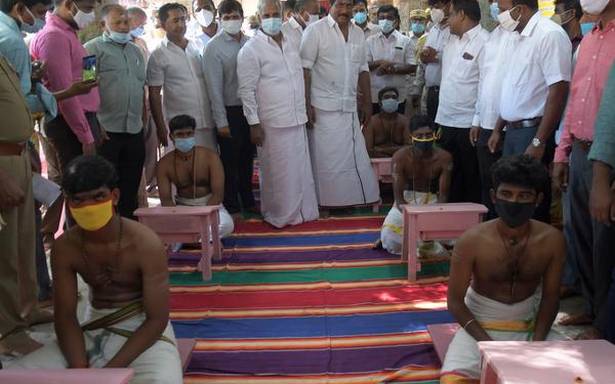 The devotees from far and near have appealed to the HR&CE administration for the conduct of the kumbabishekam at the world famous Sri Meenakshi Sundareswarar Temple.

Based on the ‘agama sastra’ and opinion gathered from the general public, it would be decided, said HR&CE Minister P.K. Sekar Babu here on Saturday.

He visited the ‘Veera Vasantharayar’ Mandapam which was gutted in a fire accident in 2018 and checked the health condition of temple elephant ‘Parvathi’.

The Minister, who went around the temple, was welcomed with poornakumbam respects by the priests.

Speaking to reporters, Mr. Sekar Babu said that after the government took over, Chief Minister M.K. Stalin had earmarked ₹ 100 crore for HR&CE, which was spelt out in the Governor’s address at the Legislative Assembly session.

Step by step, various issues in the HR&CE department would be taken up, he clarified to queries.

For instance, the gold and silver items in different forms, which were dropped in temple hundials remained idle for the past nine years. It had been decided to divide the State into three zones and appoint retired judges who would put these gold and silver to proper use of the respective temples.

Likewise, steps were being taken to recover temple lands encroached by various people from time immemorial.

As for the plans to perform kumbabishekam at the Meenakshi Temple, he said that before the announcement, certain procedures as per the ‘agama sastra’ had to be examined. The Chief Minister would be consulted.

On the rental issues due to the temples from tenants, he said that cases were pending in courts. However, based on the outcome, the government had planned to form a committee comprising Chief Secretary and others, which would have a fair rent among others.

The HR&CE Minister visited Sri Kallazhagar Temple at Alagar hills where he held discussion with the officials on widening the road leading to the Pazhamudir Cholai among other issues.