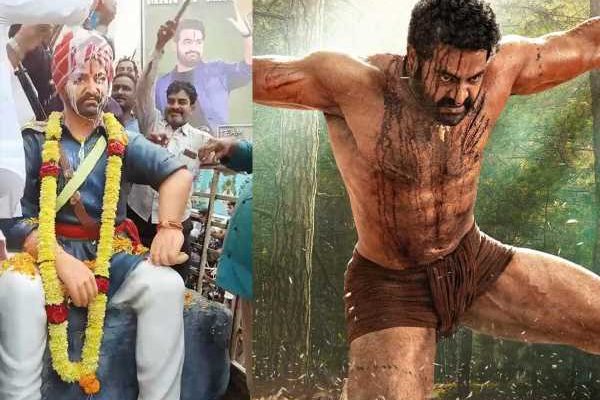 The fans never miss out on a single opportunity to celebrate their favorite star’s existence and his film releases just give them a legit reason to revel in festivities. It’s no less than a festival for them.  Young Tiger Jr NTR and mega power Star Ram Charan starrer much awaited Pan India film RRR hit the screens today and the celebrations started rather early. The videos and photos from outside the theatres , bursting crackers and dancing inside the theatres are going viral on the social media.  This time Jr NTR fans made an idol of the actor and poured milk on his idol. For the unversed, it is considered a sacred act in Hinduism.

Ahead of the film’s release, some fans of Jr NTR decided to build a life-size idol of RRR actor, put a celebratory garland on it, and pour milk on the idol.  RRR helmed by SS Rajamouli and bankrolled by DVV Danayya has finally arrived at the theaters and received positive reviews.

Jr NTR fans manage to leave us in awe every single time with their overzealous spirit. RRR release looks nothing less than a festival!  The movie lovers are queuing up outside the theatres to watch the movie RRR which also has Alia Bhatt,  Ajay Devgn and others.