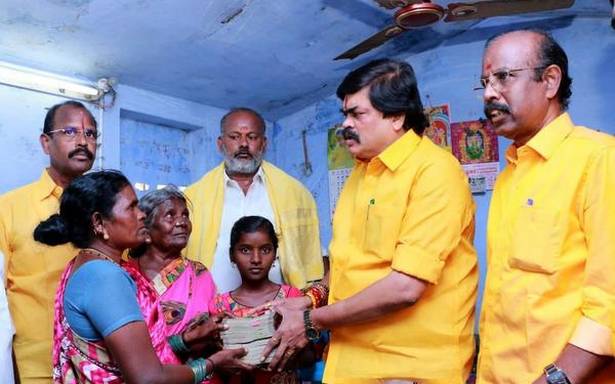 Minister for Dairy Development K.T. Rajenthra Bhalaji on Monday gave ₹ 5 lakh compensation to a minor girl, Nandini, who lost both her parents in the February 12 fire accident near Sattur.

Mr. Bhalaji gave the money from his savings towards the school education of the 12 year old girl. Her parents, Backiaraj and Selvi, were charred to death in the accident at Sree Mariyammal Fireworks.

The Minister visited her at her home in Nadusoorangudi to hand over the money.

Later, he told reporters that he would also help the girl for her higher education and marriage expenses.

He also added that he would help other victims of fireworks accidents to get due relief.

Later, addressing a meeting organised to discuss making fireworks units safe at the Collectorate, the Minister said that leasing out of factories should not be done.

Only permitted number of workers should be allowed to work in each unit. He also appealed to all fireworks manufacturers to come forward to produce green crackers as mandated by the Surpeme Court.

Atotal of 800 units have registered themselves to produce green crackers, he added.