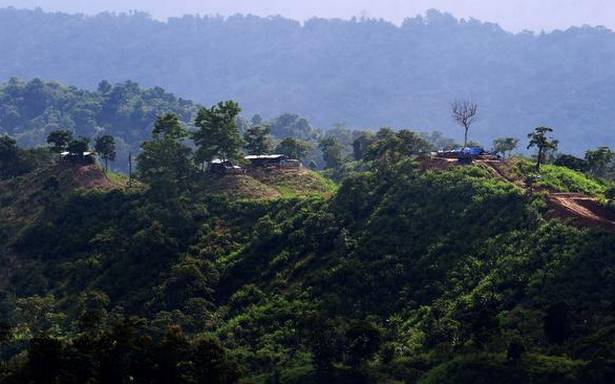 The government and people of Mizoram have been encroaching upon land in Assam along the 164.6 km interstate boundary since 1980, an Assam Forest Department report has alleged.

At the heart of the land conflict between the two northeastern States is the 1,318 sq. km Inner-Line Reserve Forest along the boundary. The conflict most recently claimed the lives of six Assam police personnel in July, a fortnight after the report was prepared by the department’s Southern Assam Circle headquartered in Silchar.

The Hindu has a copy of the report submitted to the Additional Principal Chief Conservator of Forests (Territorial).

According to the report, the boundary was notified on March 9, 1933, which clearly defines “Inner-Line” as the district boundary of the Lushai Hills. A district of undivided Assam, Lushai Hills became Mizoram, first as a Union Territory in 1972 and a State in 1987.

“During the time of demarcation in 1959-60, one of the camps of the Assam Survey party engaged in the demarcation work was set on fire by local Mizo people and as a result, valuable government properties like tents, survey equipment, official records, maps… were gutted,” it said.

The 1959-60 incident happened in the Cachar Division of the Assam Forest Department, where the 150 hectares were encroached upon by about 60 Mizo households in Frenchnagar and Dhalakhal areas in 1980, and up to 4 km was occupied from 1993-2001 along National Highway 54, the report said.

Incidents of encroachment in both Singla and Longai were recorded in November 1985. Portions of Kalakand and Shantipur areas inside Singla “were occupied with the help of armed forces of Mizoram” and they “gradually encroached upon a total of 75 hectares”, the report said.

But while the encroachers left these areas “with no known reasons” after senior Assam officials visited these areas in February 2017. The “government of Mizoram” has continued to control areas under Longai Reserve Forest by forcing Assam Forest personnel to retreat about 2 km inside the boundary, the report said.

“Since then, they have encroached 320 hectares within Longai by raising teak plantations, constructing permanent buildings, etc.,” the report said, adding that the Mizoram government has been controlling the entire 2 km stretch after constructing a road.

Similarly, in the Hailakandi Division of the Assam Forest Department, an encroachment of about 1,000 hectares of forest land by Mizoram at two different locations — 425 hectares at Kachurtal and 575 hectares at Dholcherra — have been recorded. Both areas fall within the Inner-Line Reserve Forest.

Mizoram has rejected the 1933 demarcation of the inter-State boundary. The State recognises a regulation in 1873 that “includes areas wrongfully tagged with Assam” in 1933.