The Congress listed out what it called the major failures of the government, including a declining economy, rising unemployment and inflation, and Covid-19 mismanagement. 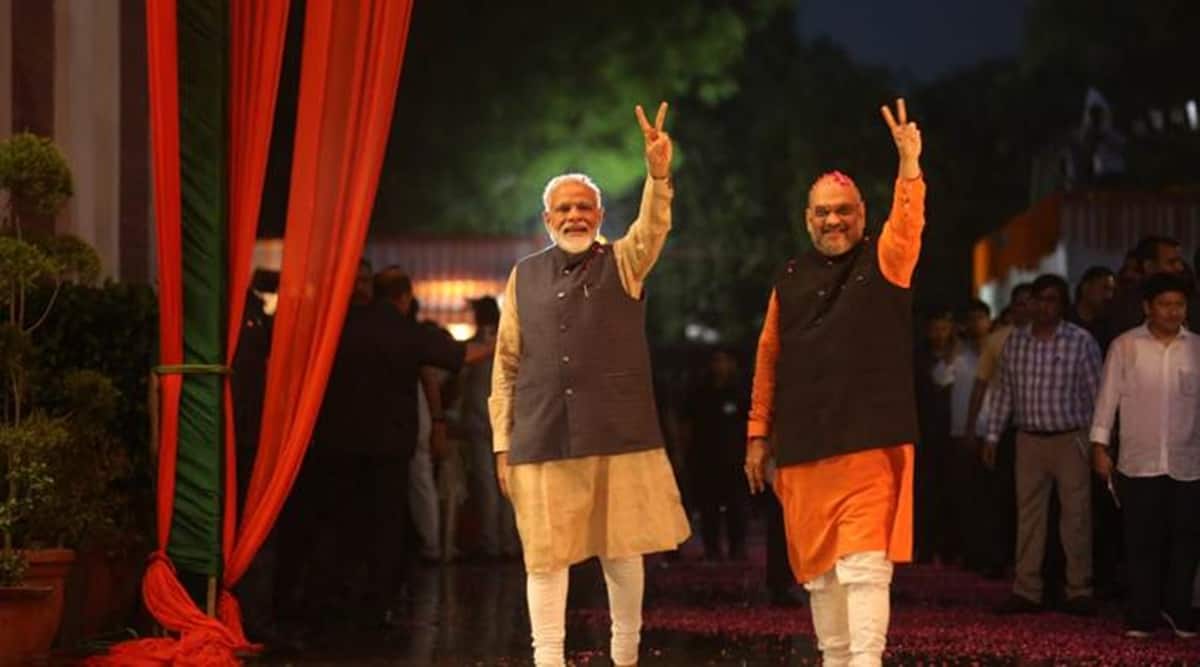 On the seventh anniversary of the Narendra Modi government on Sunday, the Prime Minister said the country is progressing, following the path of inclusive development. Union Home Minister Amit Shah said there have been “unprecedented achievements” in fields of security, public welfare and reforms. However, Opposition parties, including Congress and Shiv Sena, launched a stinging attack on the Centre for “abdicating responsibility” in a crisis and not doing enough to win the trust of people.

BJP leaders and workers are marking the seventh anniversary of the Modi government on Sunday by carrying out Covid prevention and relief work in one lakh villages. The BJP is observing the anniversary of its government at the Centre as “Seva Diwas” and in view of the pandemic, the party has decided not to celebrate the day, but instead organise relief works under the campaign ‘Sewa Hi Sangathan Hai’.

Addressing the country through his monthly ‘Maan ki Baat’ address, PM Modi said the country has experienced many moments of national pride during his government’s tenure. He also highlighted the government’s initiatives on national security and various development measures.

Over these seven years, he said, the country has followed the mantra of ‘sabka saath, sabka vikas, sabka vishwas’. “India now moves ahead not under the pressure of other countries but with its own convictions, making everyone proud,” he said.

He added, “In the midst of this pandemic, India is moving forward with the resolve of service and cooperation. In the first wave, we fought courageously; this time too India will be victorious in the ongoing fight against the virus.”

Lauding Modi for the “unprecedented achievements”, Amit Shah, in a series of tweets in Hindi, credited the Prime Minister for improving the living standards of the poor, farmers and deprived sections by bringing them into the mainstream with his “determined, holistic policies” and making India a powerful nation with his strong leadership.

“The Modi government has presented a unique example of unparalleled coordination of development, security, public welfare and landmark reforms,” he said. For the last seven years, Shah said, the people of the country have consistently expressed their unwavering faith in Modi’s service and dedication, for which he bows to the countrymen.

BJP chief J P Nadda on Sunday said while crores of party workers serve people by helping them with Covid relief material, the opposition has “quarantined” itself and works to lower the morale of the country during the pandemic.

“In this pandemic, BJP workers without being bothered about their wellbeing are standing with the people. But the opposition has gone into lockdown and quarantined itself. It is visible only in virtual press conferences or on Twitter,” Nadda said.

Information and Broadcasting (I&B) Minister Prakash Javadekar said the Modi government has changed the lives of millions of farmers with landmark decisions and reforms, and also ensured “affordable and quality health service” to the people in the last seven years.

“Congratulations to Prime Minister Modi ji for the work that has been done for the service of the country and the welfare of the people for seven years. Today, this day is being celebrated as ‘Seva Divas’. You should also be a participant in the programme in your neighbourhood,” the Union minister said in a series of tweets in Hindi and English.

Javadekar said the Modi government has “dedicatedly worked towards the welfare of the farmers in the last seven years and has changed the lives of millions of farmers with landmark decisions and reforms in the agriculture sector.”

Leading the attack against the Centre, Congress alleged that the Modi government is harmful for the country as it has failed on every front and betrayed people’s trust. The party also released a seven-point chargesheet of “blunders” it accused the government of committing, and alleged that the Modi dispensation abdicated its responsibilities towards people.

The Congress listed out what it called the major failures of the government, including a declining economy, rising unemployment and inflation, and Covid-19 mismanagement.

Congress general secretary and chief spokesperson Randeep Surjewala said the last seven years have been a story of unprecedented devastation, abdication of responsibility and abandonment of India’s people by a government that was showered with all love and affection.

“This government is harmful for the country as it has betrayed the faith of people of India. It is betraying the trust and the innate faith the people reposed in prime minister Narendra Modi,” he said.

He added, “This is a deception of the worst kind heaped upon 140 crore Indians by a government they elected based on innumerable promises. After seven years time has come to do stock taking. Time has come to ask why the country is suffering,” he said.

The Congress also came out with a 4.5-minute video, titled ‘Bharat Mata ki Kahani’, listing out the “failures” of the government in the last seven years.

In Maharashtra, Congress observed a ‘black day’ and held protests in different parts of the state and claimed PM Modi had no moral right to continue in power as the central government had “failed on all fronts”.

Shiv Sena MP Sanjay Raut said India is surviving as a nation due to the good deeds of previous governments since the time of Jawaharlal Nehru, and the present Modi government needs to introspect on whether it has been able to fulfil the basic needs of people.

“The country is surviving on the good deeds of previous governments since the time of Pandit Jawaharlal Nehru to Manmohan Singh,” the Shiv Sena’s chief spokesperson told reporters.

“When you get majority, it means people have handed you the power with faith and trust. The people’s needs and demands are very few. They need livelihood — roti, kapda, makan (food, clothing and shelter) are important along with health and education facilities…More focus and hard work is required. PM Modi has the leadership capability and hope he will give a proper direction to the country,” he said.

Maharashtra minister and senior Congress leader Ashok Chavan on Sunday said the Narendra Modi government had failed to handle the pandemic effectively and had overseen the loss of 12.21 crore jobs.

Addressing a virtual press meet, Chavan said the Centre had kept all decision-making powers in its hands but was now blaming the state governments after the Covid outbreak spiralled out of control.

Asked if he had any favourite minister in the Modi dispensation, Chavan said “good words” could be spoken about Union Minister and Nagpur MP Nitin Gadkari, who, despite ideological differences, maintains “dialogue with other parties”.

“He is the right man in the wrong party. He has a positive approach towards Maharashtra but his powers are being continuously curtailed,” Chavan said, though he did not elaborate on his assertion.

“The price of petrol has reached Rs 100 per lite. Some 12.21 core people have lost their jobs. The per capita income of Bangladesh is now higher than that of India. The policies of the Centre have devastated the country,” he added.