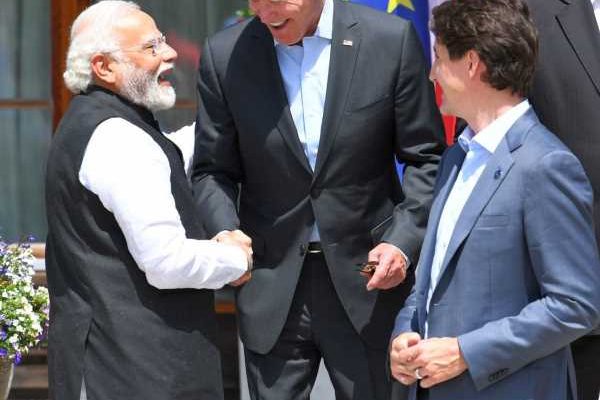 ‘While the US-Pakistan relationship has been stabilised, it’s still mired in uncertainty.’

“New Delhi’s policy toward the US has gotten closer to alliance-like behaviour than it ever has before,” points out Dr Michael Kugelman, South Asia Institute Director at the Wilson Center, the Washington, DC-based think-tank.

“Delhi has signed an accord with Washington designating it a major defence partner, and finalised a range of new military and intelligence agreements that the US typically only concludes with its top allies,” says Dr Kugelman, a specialist on India, Afghanistan and Pakistan, and their relations with the US.

“One difference between Modi’s second and first terms is that New Delhi has faced more criticism from the West, including some of its top partners, for its policies at home,” Dr Kugelman tells Rediff.com‘s Archana Masih in an e-mail two-part interview.

How would you assess External Affairs Minister Dr S Jaishankar’s recent visit to the United States?
What were the key takeaways? Especially in the background of India’s strong disapproval of the sale of F-16s to Pakistan.

It was a predictably smooth and successful visit. What stands out is the wide variety of people and groups he met with — multiple US cabinet secretaries, senior members of Congress, the US-India Business Council, the National Science Foundation, and, of course, the Indian Diaspora.

This wide range of meetings reflects the breadth of the bilateral relationship, from security and diplomatic cooperation to education and tech and Diaspora collaborations.

The announcement of the potential F-16 deal won’t spoil the mood of the US-India relationship. And neither, for that matter, will the US ambassador to Pakistan’s recent trip to Pakistan-administered Kashmir.

These incidents are inconvenient for US-India relations because they serve as reminders that Washington continues to pursue a workable relationship with Islamabad.

But in this post-hyphenation era, reminders of continued US-Pakistan friendship aren’t about to get in the way of a US-India relationship that’s much stronger, more trust-based, and more stable than the US-Pakistan one. What changes do you see in the thrust and tenor of India’s US policy, and also India’s larger foreign policy in the Narendra Modi government’s second term?

India’s US policy has come a long way over the last eight years, since Modi took office as premier.

The US-India relationship has been growing exponentially since the early 1990s, and especially the early 2000s, but it faced questions when Modi took office because of the informal visa ban in place. But once that was surmounted, the relationship’s momentum continued to build.

Modi has arguably gone further than any other Indian prime minister to strengthen ties with the US.

Strategic autonomy may still apply, but New Delhi’s policy toward the US has gotten closer to alliance-like behaviour than it ever has before.

It has signed an accord with Washington designating it as a major defence partner, and finalised a range of new military and intelligence agreements that the US typically only concludes with its top allies.

There’s also ample consistency in India’s broader foreign policy over Modi’s two terms, with an emphasis on strengthening (with varying degrees of success) relations with India’s neighbours as well as its partners in the West; playing a larger role in global multilateral organisations; and balancing relations with key rival pairs (Russia and the US, Iran and Saudi Arabia) to maintain its strategic autonomy.

One difference between Modi’s second and first terms is that New Delhi has faced more criticism from the West, including some of its top partners, for its policies at home.

Modi isn’t getting as much of the celebrity treatment in the West in his second term as he did in his first, and India’s global image has taken a hit.

This, combined with India’s position on the Russian invasion of Ukraine, has presented some unexpected challenges for New Delhi’s relations with the West during Modi’s second term. But those relations haven’t been impacted in a big way. What according to you have been the gains of Pakistan army chief General Bajwa’s visit towards improving US-Pakistan relations, especially keeping in view that the US would rather engage with the elected government of the country than an army chief who will retire shortly?

I don’t think the Bajwa visit is a data point pointing to an improving relationship. Pakistani army chiefs have often made long trips to Washington, including when the relationship is in bad shape.

Also, the trip was originally scheduled to take place earlier this year. So the visit — in terms of who he met with, how long he stayed, and what he discussed (security relations, Afghanistan, flood relief, and so on) were relatively routine.

Bajwa, who will probably retire next month, likely was focused on his legacy in Washington and wanted to ensure he leaves the relationship with the US in a relatively stable place — a status it has had for a few months now, as it’s improved since the spring.

So what then has contributed to improvements in the relationship? Having a formal US ambassador in Islamabad is significant, as that greatly eases diplomacy and policy coordination on Pakistan.

Additionally, two longtime tension points in US-Pakistan relations have eased. With US troops no longer in Afghanistan, there’s less concern about Pakistan backing the Taliban. And with Pakistan having cracked down on terrorist organisations to address the concerns of the Financial Action Task Force, that means that terrorism — at least for now, because we know that terrorist groups that threaten America and India are still present in Pakistan — won’t be as much of a concern for Washington as previously.

But most of all, the new government in Islamabad has strongly signaled a desire for better relations with Washington. It’s created healthier spaces for discussion with the US about future cooperation.

So this has led to a lot of high-level engagements in recent months, much of it focused around non-security cooperation (the proposed F-16 refurbishment deal is an anomaly).

It’s no small matter that Dilawar Syed, the top State Department official focused on investment and someone who doesn’t have Pakistan in his portfolio, spent a week in Pakistan last summer.

Still, while the US-Pakistan relationship has been stabilised, it’s still mired in uncertainty. Its future trajectory is unsettled, and it’s unclear what will anchor it now that the US has left Afghanistan.

Also, keep in mind that this year marks 75 years of US-Pakistan relations. Not to downplay the significance of so much high-level engagement in recent months, but some of it is symbolic, to mark that diplomatic milestone.

Additionally, most of the discussions in these engagements have been exploratory, not deal-making.