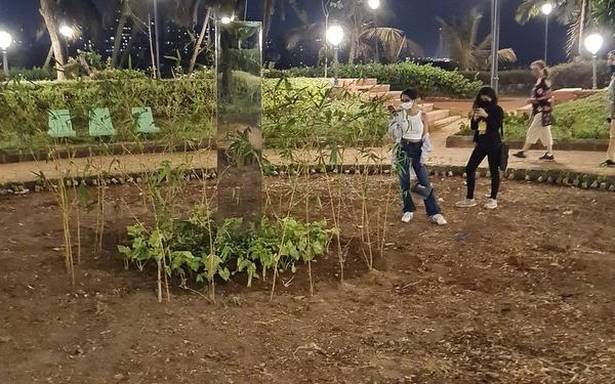 Local corporator Asif Zakeria tweeted about it in the morning

A ‘Monolith’, a sheet metal structure that has mysteriously appeared and disappeared across the world, was seen at Joggers Park in suburban Bandra on Wednesday.

Local corporator Asif Zakeria tweeted about it in the morning.

"It has numbers on side of it let’s try & figure out what they mean," he said in the tweet while sharing a few images of the triangular prism-shaped structure, around seven feet tall.

This is the second such installation that has appeared in the country after one was spotted in a garden in Ahmedabad last December.

The first Monolith was discovered in a remote canyon in Utah in the U.S. Similar structures were spotted in around 30 countries, offering some distraction and solace to the coronavirus-ravaged world.

In a press release, Zakeria said the numbers etched on one of the panels offer a coded message about nature and wildlife conservation.

Officials of the Brihanmumbai Municipal Corporation did not offer any comment about the installation coming up in the popular garden.