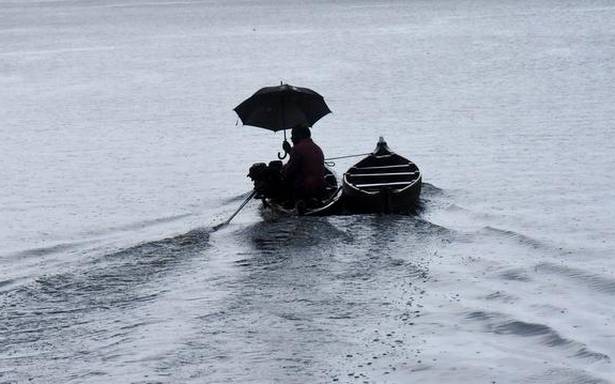 However, a vigorous phase does not seem to be on the cards at the moment, according to the India Meteorological Department’s Meteorological Centre in Thiruvananthapuram

After an uneventful start to the 2021 season, southwest monsoon rainfall is expected to pick up over Kerala in the next few days, although a vigorous phase does not seem to be on the cards at the moment.

A low-pressure area has formed over northwest Bay of Bengal, but its influence on rainfall over Kerala may not be as strong as initially expected, according to the India Meteorological Department’s (IMD) Meteorological Centre in Thiruvananthapuram.

”The monsoon will enter a normal to active period over the next few days, but not a vigorous phase. Rainfall will be fairly widespread. However, the influence of the low-pressure area that has formed over the Bay of Bengal on rainfall in Kerala is likely to be weaker than expected,” said K. Santhosh, director, Meteorological Centre.

Only one district, Pathanamthitta, has recorded normal rainfall during this period. Four districts — Kannur, Kozhikode, Palakkad and Wayanad — have reported a rainfall deficit of over minus 60%, deemed ‘large deficient’ in the IMD parlance.

The IMD had declared the onset of monsoon on June 3, and in the first week of onset, from June 3 to June 9, the rainfall deficit stood at minus 42% in Kerala and Mahe, show IMD data.

Meanwhile, the monsoon is poised to march into more parts of the country, the IMD said. Conditions were favourable for its further advance into Gujarat, Madhya Pradesh, Chhattisgarh and Odisha, all of West Bengal and Jharkhand and some parts of Bihar and east Uttar Pradesh and remaining parts of north Bay of Bengal.