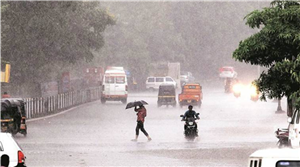 The Met department on Monday said the enhanced rainfall activity will be associated with the formation of the monsoon's first low pressure system over North Bay of Bengal, expected around June 11. NORTHEASTERN STATES along with Odisha, Jharkhand, Chhattisgarh, East Madhya Pradesh, areas along Gangetic West Bengal and Vidarbha in Maharashtra are all set to receive heavy to very heavy rainfall later this week.

The Met department on Monday said the enhanced rainfall activity will be associated with the formation of the monsoon’s first low pressure system over North Bay of Bengal, expected around June 11. Parallelly, westerly winds blowing in from Arabian Sea will once again strengthen it and these two factors will lead to an increase in overall rainfall over central, East and Northeast India towards the end of this week.

The India Meteorological Department (IMD) has predicted widespread heavy to very heavy (64 mm to 204 mm in 24 hours) rainfall over the Northeast, Odisha and Gangetic West Bengal starting June 10, with isolated extremely heavy (more than 204 mm in 24 hours) spells likely on June 12 over Odisha. Chhattisgarh, Jharkhand, East Madhya Pradesh and Vidarbha will experience heavy spells on June 11 and 12. Telangana, Yanam, coastal and South interior Karnataka will receive very heavy rainfall during June 11 to 13, the IMD has warned.

The Southwest monsoon, which hit Kerala coast on June 3, made swift advancement till Sunday. The northern limit of monsoon continued to pass through Alibaug, Pune, Medak, Nalgonda and Sriharikota with no fresh advancement on Monday.

Any further progress is likely to occur only by this weekend, as favourable systems shall develop over Bay of Bengal. In its upcoming leg of advancement, the monsoon is likely to cover rest of Maharashtra, Telangana and Andhra Pradesh around June 11 and, in its subsequent progress close to June 13, reach Gujarat, Madhya Pradesh and Odisha, keeping with the normal onset dates in these regions.