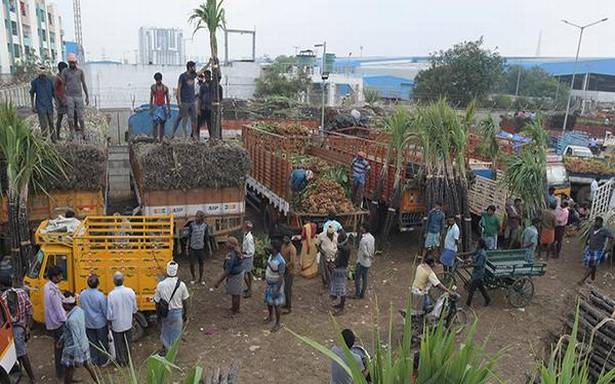 Traders expect sales to pick up as Pongal draws nearer

The Koyambedu market received additional vehicles on Tuesday, ahead of Pongal. However, the demand for sugarcane and turmeric is reportedly yet to pick up.

Unlike previous years, sugarcane trucks carried out trade at a separate space at the rear end of the market. On Tuesday, about 200 truckloads of sugarcane arrived, and this number is expected to go up by Wednesday.

Wholesale traders noted that only 50% of sales occurred in the last two days. This could be due to limited working hours and business from a different place. Each 20-piece bundle of sugarcane sold for ₹350- ₹500, with single pieces priced at ₹40.

Similarly, the market received about 50 truckloads of turmeric and 25-piece bundles sold for ₹100. Traders expect that sales will pick up from Wednesday as Pongal draws nearer.

Traffic congestion prevailed around the market despite sugarcane sellers being allotted a separate space for business.

The Federation of All Associations of the Koyambedu Wholesale Market Complex announced that the market would remain closed on Saturday on account of Pongal, and it would only function on January 17.

Normally, the market is closed for two days for Pongal holidays. But it would be kept open this time for the benefit of retailers, the federation said.

This year, vegetables used during Pongal sold faster and at a nominal rate. P. Sukumar, treasurer, Koyambedu Vegetables, Fruits and Flowers Merchants Association, said, “Since Monday, we’ve had 40%-50% more sales than normal. The market got 40-50 additional truckloads of vegetables. But there was not much difference in price as trade opened after the Sunday holiday.”