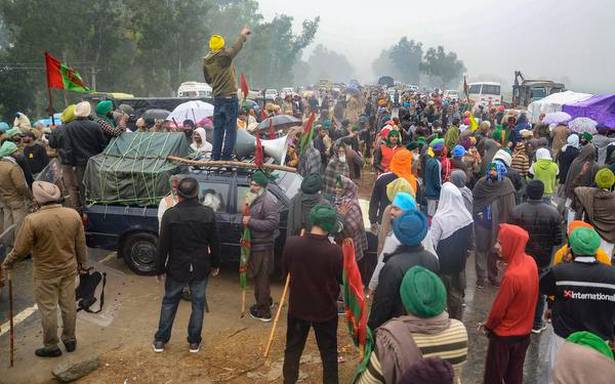 India saw a single-day rise of 58,097 coronavirus infections, the highest in around 199 days, taking the tally of cases to 3,50,18,358, while the active cases were recorded above 2 lakh after around 81 days, according to the data updated at 8 a.m. on Wednesday. The cumulative Omicron tally also rose to 2,135 cases, as reported from 24 States and Union Territories so far, out of which 828 have recovered or migrated, according to the Union health ministry data updated on Wednesday. Maharashtra recorded the highest number of 653 Omicron cases followed by Delhi at 464, Kerala 185, Rajasthan 174, Gujarat 154 and Tamil Nadu 121.

A political slugfest broke out on Wednesday between the BJP and the Congress after Prime Minister Narendra Modi’s cavalcade, in a major security breach, got stranded on a flyover, 30 km away from Hussainiwala in Punjab, as a group of protesting farmers blocked his route. Union Home minister Amit Shah termed the incident a “Congress-made trailer” of how the party “thinks and functions”. He accused the party of colluding in the security breach. The Congress, through its general secretary, Randeep Singh Surjewala, in turn, accused the BJP of resorting to “unprecedented political drama” because of its “inability” to bring crowds to a political rally that was meant to be addressed by the Prime Minister.

Novak Djokovic was denied entry into Australia and had his visa canceled after arriving in Melbourne late Wednesday to defend his title at the season-opening tennis major.

The Centre, in the Supreme Court on Wednesday, backed its committee’s recommendation to retain the ₹8-lakh annual income criterion to identify the economically weaker sections (EWS) of society as the “best way forward” and urged the court to let NEET counselling continue. The hearings in the matter will continue today.

Vaccines like Biological-E’s Corbevax and Bharat Biotech’s Covaxin that are made by traditional methods are “just as effective” as the latest mRNA technology based vaccines, says U.S. scientist and vaccine developer Dr. Peter Hotez. He announced last week that his research teams would transfer production technology to companies in India, Bangladesh, Indonesia and Botswana free of patents.

The online “auction” of Muslim women was a “carefully strategised hate crime”, says an open letter addressed to Chief Justice of India N.V. Ramana that appeals to him to take suo motu cognisance of the incident. Photos of over 100 Muslim women, including prominent journalists, activists and thinkers, were uploaded on an app called “Bulli Bai” on Github and were subsequently “auctioned” as domestic helps on January 1, 2022. This is the fifth time in six months that such a sale has taken place online.

No muscle, money power or cross-border infiltration to be allowed during Manipur polls: ECI

The Election Commission of India (ECI) promised a zero tolerance approach towards the use of muscle or money power during Manipur’s upcoming Assembly elections, during a review of the State’s poll preparedness held on Wednesday. It also directed that a strict vigil be kept on the international border with Myanmar to ensure no unlawful transit or infiltration. With the State Assembly’s term due to expire on March 19, elections are scheduled for 60 Assembly constituencies.

The Civil Services (Main) Examination, 2021 will begin according to schedule this Friday, the Union Public Service Commission (UPSC) said on Wednesday, even as a group of candidates filed a last-minute petition in the Delhi High Court, pleading for a postponement in light of the recent surge in COVID-19 cases. The case has been listed for a hearing on Thursday. The examination is scheduled to be held on January 7-9 and 15-16. India reported more than 58,000 COVID-19 cases on Wednesday, double the number seen just four days ago, driven by the highly contagious nature of the Omicron variant.

The Mumbai Police on Wednesday said that so far three people had been arrested in connection with the ‘Bulli Bai’ app, which targeted Muslim women by putting up their photos online for auction. Addressing a press conference, Mumbai Police Commissioner Hemant Nagrale also expressed displeasure over comments made on the ongoing investigation by authorities outside Maharashtra. “Generally, we don’t speak on cases outside our State. It is better not to issue a statement if one has no detailed information about the case,” he said, adding that the comments had been unnecessary.

As India and China attempt to work out dates for the 14th round of Corps Commander level talks, the Army’s Leh-based 14 Corps saw a change of guard on Wednesday as Lt. Gen. Anindya Sengupta took over as the General Officer Commanding (GOC), Fire and Fury Corps, replacing Lt. Gen. P.G.K. Menon, who led the last few rounds of talks from the Indian side.

A petition has been filed in the Supreme Court challenging guidelines issued by the Bombay High Court in cases under the Protection of Women from Sexual Harassment (POSH) Act, which include a blanket bar on parties and advocates from sharing records, including orders and judgments, with the media. The petition filed by advocate Abha Singh argued that the September 24, 2021 order of a Single Bench of the High Court was a “death blow” to freedom of speech and expression enshrined under Article 19.

Continuous snowfall in Kashmir badly affected surface and air traffic on Wednesday. Several universities in the Valley postponed their examinations due to the ongoing spell of snowfall. An official said only four flights out of 44 were able to land at the Srinagar airport. Even these were delayed due to poor visibility.

State of emergency in Kazakhstan as president vows crackdown

Authorities in Kazakhstan declared a nationwide state of emergency and promised a tough crackdown on Wednesday as mass unrest plunged the country into chaos. Long seen as one the most stable of the ex-Soviet republics of Central Asia, energy-rich Kazakhstan was facing its biggest crisis in decades after angry protesters over rising fuel prices stormed government buildings.

Cheteshwar Pujara said the “match was in the balance,” but was confident the Indians would pull off a series clinching win on day four. “We need to get Elgar out early,” he said.

Biden to take aim at Trump for Jan. 6 attack in anniversary speech

U.S. President Joe Biden will say his predecessor, Donald Trump, had "singular responsibility" for the January 6 attacks during a speech on Thursday marking the first anniversary of the deadly event, White House spokesperson Jen Psaki said on Wednesday. Mr. Biden and his top aides have been reluctant to talk directly about Trump since he took office last January, even as the Republican former president continued to spread lies about his election loss.

The annual Grammy Awards Show has been postponed indefinitely due to the uncertainty surrounding the Omicron variant of COVID-19, the Recording Academy and CBS said on Wednesday. "We look forward to celebrating Music’s Biggest Night on a future date, which will be announced soon," according to the statement.