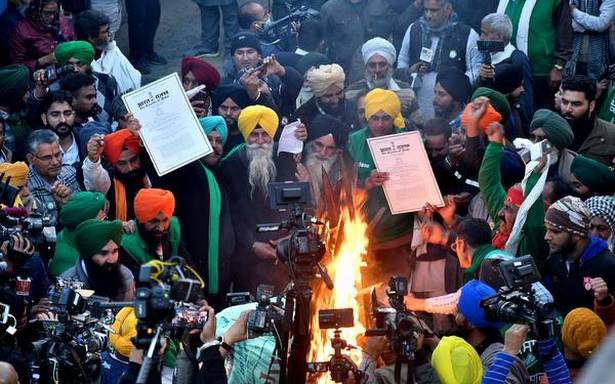 President Donald Trump was impeached by the U.S. House for a historic second time on January 13, charged with “incitement of insurrection” over the deadly mob siege of the Capitol in a swift and stunning collapse of his final days in office.

Farmers’ protests | No clarity on January 15 talks, a day after Supreme Court stay on farm laws

As thousands of protesting farmers burned copies of the three contentious farm reform laws to mark the festival of Lohri, the Central government was yet to decide whether to hold its next round of negotiations with farm unions on January 15.

More than three months after Afghanistan announced its next Ambassador to India, New Delhi has yet to grant its “Agrément” or acceptance of the Afghan government’s nominee, officials in both capitals confirmed.

In his government’s first admission yet of Indian involvement in developing a container terminal at the strategically coveted Colombo Port, President Gotabaya Rajapaksa on Wednesday said 49% of the investment will come from the “Adani Group and other stakeholders”.

The newly declassified 2018 Strategic Framework for the Indo-Pacific, made public by the Trump administration in its last week in office, underlines how prominently what it describes as “strategic competition between the U.S. and China” set Washington’s regional policy over the past four years, as well as President Donald Trump’s mixed record in effectively addressing that challenge.

At its meeting on textbook reforms on Wednesday, the Parliamentary Standing Committee on Education heard presentations from right-wing organisations and educationists, including the man at the centre of a debate on the “saffronisation” of textbooks under the Vajpayee government. They argued that Mughal history is being whitewashed in Indian textbooks, and crowding out space for history from the Vedic era.

Construction work on new Parliament building is likely to begin on January 14, after the Supreme Court gave the go-ahead on January 5 and the Heritage Conservation Committee (HCC) approved the proposal on January 11, according to Housing and Urban Affairs (HUA) Ministry officials on January 13.

Vaccine maker Bharat Biotech has started supplies of Covaxin, the COVID-19 vaccine it has developed in collaboration with the Indian Council of Medical Research-National Institute of Virology (ICMR-NIV).

OTT (Over-The-Top) platforms such as Netflix, Amazon Prime and others need to be regulated, Chairman of the Central Board of Film Certification (CBFC) Prasoon Joshi said at a meeting of the Parliamentary Standing Committee on Information and Technology.

Coronavirus | Focus is on providing vaccination free of cost to all in the State, says Edappadi Palaniswami

After successfully controlling the spread of COVID-19 by deploying a comprehensive healthcare strategy, Tamil Nadu Chief Minister Edappadi K. Palaniswami said he was now focusing on the task of providing vaccination free of cost to all in the State.

The Narendra Modi government’s affidavit filed in the Supreme Court on January 11 claiming that due consultations were made before bringing in the three farm laws is an attempt to “prevaricate, distort, misrepresent and mislead”, the Congress said on January 13.

The Agriculture Ministry has denied a Right to Information (RTI) request for details on pre-legislative consultations on the farm reform laws, saying the matter is sub judice.

The Chennai Police registered 11 cases against 10 theatres until Wednesday evening for violating the 50% seating capacity rule and COVID-19 safety guidelines during the screening of the Vijay-starrer Master.

The Border Security Force on Wednesday unearthed a 30-foot deep and 150 metre-long cross-border tunnel in Jammu’s Samba district, the third such tunnel since November last year.

India, plagued by injuries, headed to Australia’s Gabba fortress for Friday’s final Test with high hopes of retaining the Border-Gavaskar Trophy after securing an epic draw in Sydney to leave the series locked at 1-1.