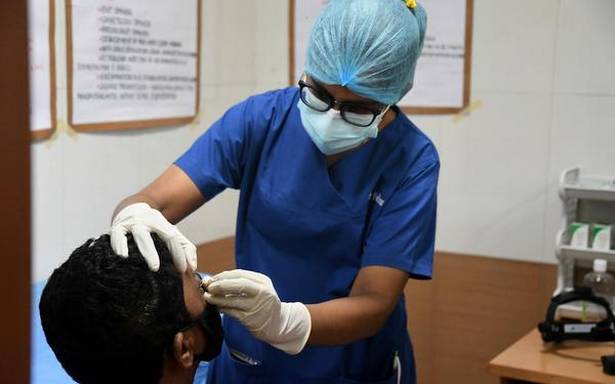 India has so far reported 28,252 cases of mucormycosis, Union Health Minister Harsh Vardhan on Monday while chairing the 28th meeting of the Group of Ministers on COVID-19.

Dr Harsh Vardhan added that as of Monday over 1.4 crore COVID vaccine doses are still available with the States.

“In the second wave, we see that continuously daily cases are declining and are outnumbered by new recoveries 83% of active cases are in 10 States and the remaining 17% in 26 States and Union Territories. Currently Delhi, Madhya Pradesh, Rajasthan, Haryana, Gujarat, Uttarakhand and Jharkhand have less than thousand cases. This when Jammu, Punjab, Bihar, Chhattisgarh and Uttar Pradesh have less than two thousand cases. Also even the most affected States — Maharashtra, Kerala, Karnataka and Tamil Nadu — have observed decline in the number of cases at a significant rate,” said Dr. Vardhan.

The Minister said that INSACOG sequencing labs are looking at the mutants which have significant potential of severely affecting the disease transmission.

“As of now 10 national labs under INSACOG have sequenced around 30 thousand samples and now 18 more labs have been added to the consortium recently to boost the capacity of sequencing,” said Dr. Vardhan.